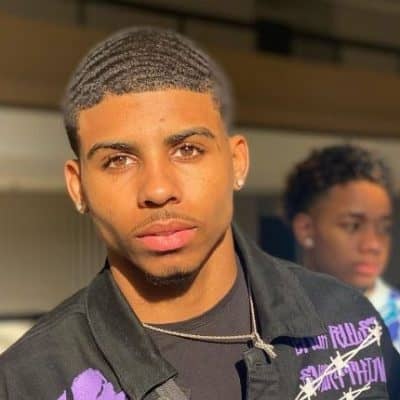 Damaury Mikula is currently possibly taken. He has not disclosed details about his affair or girlfriend. But in one of his TikTok videos, he lip-synced a song and wrote he won’t break up with his girlfriend.

But he has a child. His daughter’s name is Bella and her mother’s name is Destiny. Damaury posted a video in Jan 2021 titled Saying yes to My BABY MOM for 24 hours (I’m broke!!! 😔).

Damaury Mikula is an American social media star. He is popular for his content on TikTok where he posts comedy and lip-syncs videos.

He was born on 09 Jan 2003, in the United States. The name of his father is unknown and his mother’s identity is also not revealed.

He also has a brother Devronrharris and a sister. The picture of his mom was posted by his brother on Mother’s Day.

Moreover, his ethnic background is All-American but he has not disclosed his academic history. But he used to play basketball during his high school days.

Damaury Mikula’s TikTok account is popular as it is followed by more than 2.3 million people. This account was created in Oct 2019 and has mostly comedy and lip-sync videos.

He is also one of the popular YouTubers. Damaury has started the YouTube channel on 29 Nov 2013 and as of now, it has gained more than 261k subscribers.

This channel has videos related to compilations, reactions, comedy, and pranks. Some of his uploaded contents are Building a Gingerbread House Then Destroying it with the fam, Me and Destiny Morning Routine 😬😀 (Road trip vlog day 2), Orlando vlog + never have I ever, and more.

This steamer has an estimated net worth of $500 thousand as of the year 2021. The salary from his web career is unknown.

This TikTok star has not been involved in any sort of rumors or scandals yet and is doing great in his digital career.

Regarding Damaury Mikula’s body features, his height and his body weight are unknown. Moreover, the color of his eyes is brown and his hair is black.

Mikula is available on social sites. His Instagram is followed by over 294k people and he also has a Snapchat account damaurymikula4.