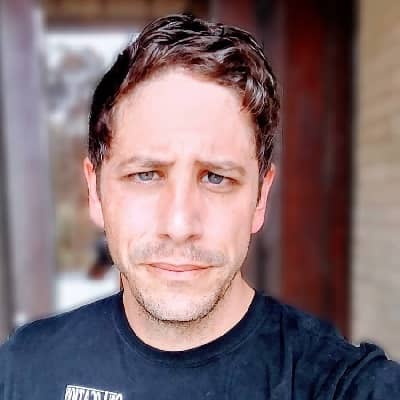 Damian Maffei is a married man. He tied the knot with his girlfriend, Erin Hogan in 2006.

His wife Erin is a Critical care nurse at Maine Medical Cente.

Who is Damian Maffei?

Damian Maffei is renowned as an American theater artist and film actor. He is best known for his role as James in the thriller film, Closed for the season.

Damian was born on June 27, 1977, and his birthplace is Maspeth, Queens, United States. He is of American citizenship unfortunately his ethnicity is unknown.

His full name is Damian Paul Maffei. He is the son of Willian Maffei and Mary Maffei. However, not much information is known about his siblings.

Moving towards his academic background, he went to Division Avenue High School, and then he joined Nassau Community College.

Moreover, he studied at Willian Esper Studios for acting in Manhattan.

Before starting a career in acting, Damian works as a waiter and suit salesman. In 1996, he was featured on television for the first time in the role of Drug Park kid in the film, The offering.

In the year 2003, he appeared in the minor role of Brunette Cop in the movie, Nikos. A year after he featured in the supporting role of the film, Ghost Lake as Young Fisherman.

Damian made his career breakout after appearing in the prominent role in the 2008’s film, LiveMansio: The Movie as Jack. Since then, he starred in numerous films such as 7 Couches (2009), Closed for the Season (2010), Christmas with the Dead (2012), and more.

Lately, he appeared in the horror-thriller film, Wrong Turn in 2021, portraying the role of Morgan/ Deer Skull. Damian is also featured in Time’s Up Movie which is his upcoming movie along with Hannah Fierman, Felissa Rose, and others.

Besides film, he is also a theatre artist who has been worked with various production companies like, Thomas Jane (Suckerfish), The Modern Stage (Miracle Day), Cultural Arts Playhouse (The Music Man), and so on.

Damian keeps himself away from any kind of rumors and scandals that create headlines in the media.

As per other online sources, he has an estimated net worth in the range of $1 million to $ 5 million throughout his profession as a stage and film actor.

Furthermore, his exact salary, real estate, and other income are still under review.

The actor stands at the height of 6 feet 1 inch tall. He has brown hair color with hazel pair of eyes.

Furthermore, his exact weight and other body measurement are not available at the moment.