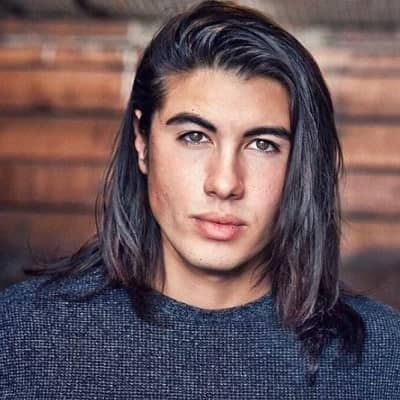 There is no information regarding his love life. He is tight-lipped when it comes to talking about his personal details. He is possibly single for now. Currently, he is serious about his career and working hard on it.

Furthermore, he has not dated anyone until now. So, we can assume that he is not married neither he is in a relationship. Hope he finds a caring girl very soon.

Who is Damian Romeo?

Damian Romeo is a Canadian actor and Model. Likewise, he is also an Infantry soldier of the Canadian Forces. He is famous for his performance in the 2021 Netflix comedy Drama “Ginny & Georgia.” Damian is well-known for films such as The Haunt (2016), Cult of Nightmares (2020), and Believe in You (2020).

Likewise, his mother is Kelly Harrison. He grew with his brothers, Julian Romeo and Maximus Romeo in his hometown. He shares a strong bond with his family members and often shares pictures of his family.

Similarly, his nationality is Canadian and his birth sign is Gemini.

Damian started his career as a model and participated in model hunts. As a model, he worked for various brands such as walked ramps for different designers.

The talented actor, Damian Romeo made an on-screen debut in 2014 through the short film ‘Magic’. In the year 2016, he made his appearance in several movies including, Saving Dreams, Forever a Gentleman, and The Haunt. Between 2017 and 2018, he cast in the short film Appalachia and the TV mini-series ‘The Olympus Project’.

After that, he appeared in the short movie, Accidental Bible Camp (2018) and Tv Series, Accidental Bible Camp (2019). Romeo starred in the 2020 thriller drama ‘Believe in You’ along with Karen Simpson & Nosa Obaseki. The same year, he made his appearance in Canadian science-fiction horror ‘Cult of Nightmares starring Carrie Evaristo, April Lee, and Steve Kasan and directed by David Paul Scott.

He then cast in the Netflix comedy Drama ‘Ginny & Georgia’ in 2021 in the recurring role of ‘Matt Press’. The series was written by Debra J. Fisher and created by Sarah Lampert. The series was aired on Netflix on February 24, 2021.

This 26 years old talented actor has earned a good amount of money for his living. According to the data for 2021, his estimated net worth ranges around $1ooK. The major source of his income is a Successful Movie Career.

Currently, he is living a luxurious life in Toronto, Oronto.

To date, the actor has not experienced any sorts of discussions that make a rumor and gossip in the media.

Romeo has a height of 6.4 feet. He is a handsome youngster and has a charming personality. similarly, his eyes are of dark brown color, and his hair is black. He mostly uses different colored eye lenses. Likewise, he has several tattoos on his body. People appreciate him for his athletic build.