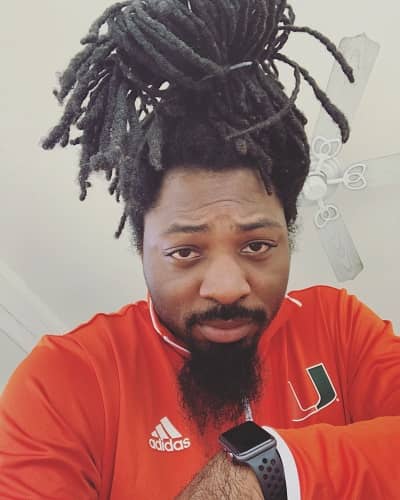 Damien Berry is a former American football player. Feby Torres from the 9th season of Basketball Wives spilled some tea about Damien. They have been dating each other for a while and Damien wants to settle down. But his girlfriend is not quite sure about it.

Feby has doubts due to her past and wants to be fully sure before making the next move. She wants the relationship to be long-lasting and would be heartbroken if they have to get a divorce or separate after getting married. Berry and Torres both have a past and are trying to work around with that. A Twitter user wrote,

“I feel like Feby is on the wrong show, she’s definitely giving LHH vibes. #BasketballWives.”

“I don’t know why #basketballwives is starting with feby and evelyn , they wasn’t favs last season…. anyone else feel like turning? Ready to see OG Jackie and Jennifer , respectfully,”

Damien Berry’s trouble with the law

Damien Berry was arrested in the year 2015 after allegedly bouncing more than $100k in bad checks. He was jailed for writing a worthless check and unauthorized removal of property which was Berry taking a car. He was kept in the Lee County Jail in Ft. Myers, Florida on the warrants. Previously, he was arrested for driving on a suspended license and failure to appear, display license on demand, and failure to pay child support.

American Feby Torres is a reality TV star and Model. Torres is renowned for her love relationship with her ex-boyfriend, Lance Stephenson.

Last, in 2019 she featured the reality TV series, Basketball Wives.

Next, she will make her appearance at the 9th season of the show. Read more bio…