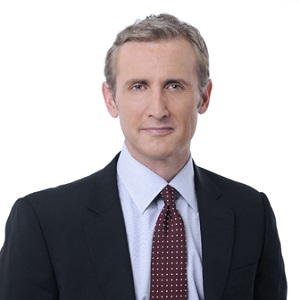 I'm not going to let people get away with either a dishonest or inaccurate premise to what we're talking about because I think that does the viewer a disturbance.

Supreme Court arguments and decisions are fascinating to a few of us and really pretty boring to most.

What is the relationship of Dan Abrams?

Dan Abrams is in a living relationship with his longtime girlfriend Florinka Presenti. She was part of the winning team on ‘The Amazing Race 3’ and has a baby with Abrams.

The baby named Everett Floyd Abrams was given birth in June 2012. Before settling with the Presenti, Dan Abrams was in a relationship with Elisabeth Rohm. Based on the news, he even had an engagement with Rohm.

Later, the couple broke the relationship apart in 2005. Now, although Dan Abrams is not married is living a joyous life with his girlfriend and a child.

Who is Dan Abrams?

Dan Abrams is a popular television host and a regarded anchor of legal affairs for ABC News. Abrams also hosts the shows 60 Days In and Live PD on the A&E network.

Besides, the host is well known for his profession as a legal commentator, author, web entrepreneur, and former Nightline anchor.

Talking about his early life, he was born on 1966 May 20. His parents are his father Floyd Abrams, and his mother Efrat Abrams. He was born in a Jewish family and has a sister, Ronnie Abrams.

Abrams who grew up in the United States was raised by his parents during his childhood. He graduated in 1984 from the Riverdale Country School. Likewise, years later he did B.A. from Duke University in political science.

In 1992, he graduated from Columbia University Law School with a Juris Doctor Degree. Following their graduation with the law degree in hand, Abrams took the pace towards his career as a legal analyst.

Dan Abrams started as a reporter for Court TV. The reporting job is considered his first-ever job in his career. In the period of 1990s, Abrams reported the International War Crime Tribunal and the assisted suicide of Dr. Jack Kevorkian.

He later left the court to work as a correspondent for NBC News. During his career at NBC News from 1997-to 1999, he began hosting his own, The Abrams Show. While hosting the show, he also accepted the lead managerial position at MSNBC.

Following the completion of his tenure at NBC, he moved to ABC News and anchored on Good Morning America. Until 2014, he held the position as the Chief Legal Affairs Anchor on ABC.

Apart from being the host, he also during his heyday career period founded Abrams Media Network.

His networks include 7 popular websites, Geekosystem, a website covering tech culture, Mediaite, a media news website, Styleite covering beauty and fashion, Sportsgrid following sports-related and Gossip Cop monitoring the report about the celebrity of the entertainment

Till today, he also published numerous articles on the news portal and is an author of various books. Such a multi-talented and multi-career holder Dan Abrams has an estimated net worth of $25 million as of 2022, but his salary is unknown.

Is Dan Abrams involved in any rumors and controversies?

To date, Dan Abrams hasn’t faced any controversies in his career and profession. But following his break-up with his ex-girlfriend, several rumors got over the headlines about him. His sexuality was the question behind the break-up with Elisabeth Rohm.

However, things came to the surface of the water level, when the media began to notice him with his current girlfriend Florinka Presenti. Likewise, except for her, the father of a child, Dan Abrams doesn’t have any affairs with other women.

Moving towards his body measurements, he has grey-brown hair color and his eyes are blue. He has a good height of 5ft 9inch. There is no information about his body weight, shoe size, and dress size.

Also get to know more about the birth facts, education, career, net worth, rumors, height, and social media of different personalities like Brooke Anderson, Hosea Sanders, and Jeff Macke.