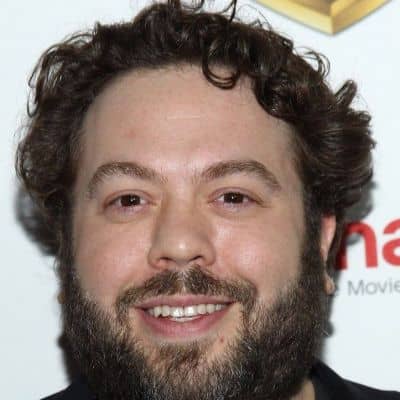 Talking about his relationship details, Dan Fogler is a married man. He is happily living a married life with Jodie Capes who is a co-founder of Capes Coaching, a career coaching company for actors and artists.

The couple tied the knot on 10 October 2009 in a private manner with the involvement of close family friends.

Moreover, they have two children named Edie and Franny. Dan lives happily with his family without any complications.

Who is Dan Fogler?

Dan Fogler is a well-recognized American actor, comedian, and writer. Fogler is widely famed for his appearances in films, Balls of Fury, Good Luck Chuck, Fantastic Beasts and Where to Find them, and Kung Fu Panda.

Moreover, he made his Broadway debut in The 25th Annual Putnam County Spelling Bee and won the Tony Award for Best Featured Actor in a Musical.

Dan Fogler was born on 20 October 1976. At present, he is 45 years young star. Likewise, his birthplace is Brooklyn, New York, the USA.

Dan is the son of his father, Richard Fogler whereas his mother is Shari Fogler. Moreover, he has a brother named Jason Fogler.

Talking about his nationality, Fogler holds an American identity whereas his ethnicity is American-Jewish.

Regarding education, the actor studied at Poly Prep Country Day School in 1994. Earlier, he attended the School of Theatre at Boston University.

He also won the Theatre World Award for the original off-Broadway production and the Tony Award for Best Featured Actor.

Moreover, the star featured on television for the first time in 2002 on FOX’s 20 Seconds to Fame. He has also performed in some television series like The Goldbergs, NBS’s Hannibal, CBS’s The Good Wife, and so on.

In 2007, he appeared in 2007’s Ball of Fury. He has featured in the recurring role in Fanboys, Take Me Home Tonight, Scenic Route, Europa Report, and Fantastic Beasts and Where to Find Them.

Fogler has also written and directed the play Elephant in the Room which was produced by the New York International Fringe Festival in 2007. He then wrote and directed Hysterial Pyscho in 2009 which aired at the 2009 Tribeca Film Festival.

A famed star, Fogler has earned a decent amount of money from his profession. He has been active in his profession from the year 1999 till the present.

It is reported that Dan Fogler has an estimated net worth of $4 million.

Dan has never been part of any controversial matter or rumors till now. The actor has been preoccupied with his professional and private life.

It seems that Fogler prefers enjoying his personal life and does not want to merge it with his professional life.

45 years young star, Dan has handsome looks and an admirable personality. He stands at a height of 5feet 5inches. Also, he has a balanced body weight of 90 kg.

Furthermore, Fogler has dark brown eyes whereas his hair is brown.

Regarding his social media presence, Dan Fogler is an active personality on social media. Dan has more than 99.4k followers on his official Instagram account @foglersfictions.

He is also active on Twitter with around 64k followers.

Moreover, Fogler is also available on Facebook with nearly 4.4k fans and supporters.