American analyst and football player Dan Fouts is married and a father of three. 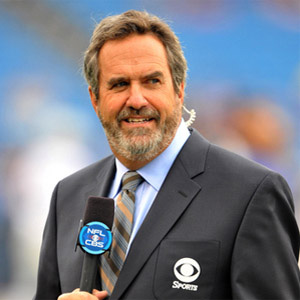 I'm over it. You strive to win a Super Bowl and you do everything you can to get there. But being in the Hall of Fame, you never play for that honor. It's incredible

First of all, it was such an honor to be chosen. You had to be voted in by players and coaches that time. But having it in Hawai'i was a brilliant idea

I always loved going to Hawai'i

it was very, very special.

Dan is a married man as of now. As of now, he is married to Jeri Martin. The couple dated for some years. Later they got married on July 23, 1994. They have two children together. Currently, they are living happily without any sign of divorce or separation. He has two children from this marriage. They are Krueger and Shannon.

Who is Dan Fouts?

California-born Dan Fouts is a retired professional ‘American football’ player. He is popularly famous for his incredible performance in the field.

Multi-talented Dan is also an actor. Additionally, he is popular as a color analyst for NFL games on CBS television. He started his professional career in 1973.

Presently, he is a prominent figure among the fans playing for the San Diego Chargers of the National Football League. He played for them from 1973 to 1987. He played at the quarterback position.

Dan Fouts was born in San Francisco in the state of California on June 10, 1951. He possesses American nationality and his ethnicity is North American.

His birth name is Daniel Francis Fouts. He was born to his father, Bob Fouts. Bob is the Bay Area Radio Hall of Famer. He was fascinated by football from a young age. This interest later influenced his career.

As per his education, he attended Marin Catholic High School. Later he joined St. Ignatius College Preparatory for his further education. Afterward, he enrolled at the University of Oregon to complete his college-level studies. Furthermore, he played football for most of his time in school and college.

Dan started his football career in his high school days. He played for the Oregon Ducks Football team in his college days. During his senior year at the University of Oregon, he completed 171 of 348 passes. Additionally, he had 12 touchdown passes, 19 interceptions, and completed 2041 yards. He kept on working hard and improving in every game. Consequently, his hard work paid off and San Diego Chargers signed him. His outstanding performances earned him a place in most of the games.

Despite some couple of bad seasons, he had an incredible career at San Diego Chargers. During his entire career, he completed 43,040 yards in 181 games. Additionally, he completed 3,297 passed with 254 touchdowns and 242 interceptions. Dan got inducted into the “Pro Football Hall of Fame” in 1993. During his career, he won the “Pro Bowl” 6 times from 1979 to 1983, and in 1985. He earned the title of “NFL Most Valuable Player” in 1982. The same year he also won “NFL Offensive Player of the Year”.

Currently, he works as a color analyst for NFL games on CBS television.

Presently, he earns a pretty good amount of salary and has a net worth of $10 million.

Dan has won the Associated Press NFL Offensive Player of the Year Award.

Dan is no news to the media’s tittle-tattle. Being a famous athlete, he was prone to rumors and controversies time and again. Additionally, media attacking and condemning him for one bad game was nothing new. Presently, there are no rumors that surround his personal and professional life.

Dan Fouts has a good height of 6 feet 3 inches with a bodyweight of 93kg. His hair color is salt and pepper and his eye color is blue. There is no information about his shoe size.