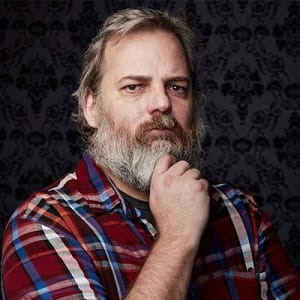 Dan Harmon was initially in a relationship with American Actress Erin McGathy. He proposed to her on December 28, 2013. Eventually, the pair married on 15 November 2014. The marriage did not last long and they separated in 2015. At present, Harmon is dating writer Cody Heller.

Who is Dan Harmon?

Dan Harmon is an American writer, producer, actor, and voice actor. He is the creator and producer of   NBC comedy television series ‘Community’. Additionally, he is the co-creator of the Adult Swim animated series ‘Rick and Morty’.

Harmon was born in Milwaukee, Wisconsin on January 3, 1973. He became interested in the concept of storytelling since his childhood years which pave the way for his career in show business. He is of American nationality. Furthermore, at present, there are no details about his ethnic background. Throughout most of his early life and childhood years, he grew up in Milwaukee, Wisconsin.

Talking about his education, Harmon attended Brown Deer High School in Brown Deer and graduated from there. Later, he graduated from Marquette University. Furthermore, he also attended Glendale Community College for a brief amount of time.

Some other movies and television series that Harmon has worked on are ‘Harmontown’, ‘Rick and Morty’, ‘Good Game’, ‘HarmonQuest’, ‘Great Minds with Dan Harmon’, ‘The Worst of Pirated Adult Swim Shows’, ‘The Simpsons’, ‘Water and Power’ and ‘Acceptable TV’ among others. Additionally, he also has 47 credits as a writer, 55 credits as an actor, 20 credits as a director, 10 credits as an editor, and 5 credits for visual effects.

Harmon garnered 2 Emmy Award nominations in 2009 for Outstanding Original Music and Lyrics. He won one of his nominated categories. Additionally, he has also garnered nominations for Annie Awards and Hugo Awards. All in all, he has 2 wins and 6 nominations.

Harmon has not revealed his current salary. However, he has an estimated net worth of around $ 5 million at present.

Harmon became part of a controversy after he was accused of sexual misconduct from Megan Ganz, a writer. Harmon later apologized for his treatment towards her.

Furthermore, people have criticized him over the years for his angry and abusive Twitter rants. At present, there are no rumors concerning her life and career.

Talking about his body measurement, Harmon has a height of 6 feet (1.83 m). Furthermore, his hair color is light brown and his eye color is hazel brown.

It’s very true “Love is Blind.” Even Forty-four years old Dan Harmon is dating new girlfriend after his divorce… Continue reading to get detail information about his new relationship!!!