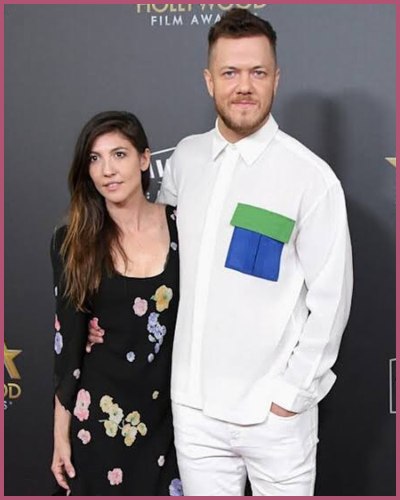 Dan Reynolds and Aja Volkman are no longer husband and wife!

Imagine Dragons vocalist Dan Reynolds took to social media platforms to announce that he and his wife have separated after more than ten years of marriage. The singer tweeted on Friday, September 16,

“I am saddened to say that after many beautiful years together Aja and I have separated,”

“Being great parents to our children is our number one priority. Thank you for always supporting us with love and care for all these years.”

The former couple married back in 2011. They shared four children: daughter Arrow, 10, twin daughters Gia and CoCo, 5, and son Valentine, 2.

This is not the first time they have decided to end their relationship. The pair originally split temporarily in 2018. In early 2018 the two announced that he and Volkman were ending their marriage just one year after welcoming twin daughters Gia and Coco.

A brief split of Dan Reynolds and Aja Volkman

The 35-years-old rocker revealed that they were planning to divorce in early 2018. He tweeted at the time,

“After 7 beautiful years together, Aja and I’s marriage has come to an end,”

“Our children continue to be the most important thing in our lives, & we will continue to co-parent them with all our love.”

However, the two reunited eight months later in 2019. At the time, the “Believer” singer also disclosed that he and Volkman never went through with divorce proceedings. After reconciliation the two even collaborate on the song “Bad Liar” together.

Volkman also shared an emotional post revealing that the two were working things out and rebuilding their relationship. She shared a family photo with a caption,

“I know that it’s been a crazy road. It’s killed us both in so many moments. Last year we killed each other and now we are rebuilding.”

Emma Roberts found a New Love after her split from Garrett Hedlund! Who is her New Boyfriend?
Tags : Imagine Dragons Singer Song-writer