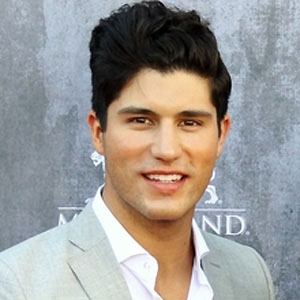 Dan Smyers is married to his longtime girlfriend, Abby Law since May 13, 2017, in Nashville. His family, bandmate, Shay Mooney and their three adopted dogs witnessed their wedding.

The couple met the first time at the Animal Rescue Center in Nashville in 2013 and got engaged in 2016.

Who is Dan Smyers?

Dan Smyers is an American country music vocalist and songwriter.

He is known as one of the duo Dan + Shay. He got himself more recognized after his band released ’19 You+Me’ in 2013.

Dan Smyers was born on August 16, 1987, in Wexford, Pennsylvania. He is currently 32 years old. His father is Dave Smyers and his mother is Patty (Callenda).

Dan met James Shay Mooney in 2013 and formed a band in collaboration with him. They gave the name ‘Dan+Shay’ to the band. They wrote and released several songs in the time interval of two months and signed with Warner/Chappell Musci. The band released their debut single ’19 You+ Me’ in 2013 which received a positive response at the Taste of Country and praised as ‘warm details and emotion’.

Along with Scott Hendricks, they released their debut album, ‘Where It All Began’ on April 1, 2014. After a month, he released his single, ‘Show You Off’ on country radio and the band appeared on the Ellen show in 2014.

They released their first single, ‘From The Ground Up’ in February 2016 and he has also worked with Kelly Clarkson and Rascal Flatts.

The band received the Academy of Country Music Awards Vocal Duo of the year nomination in 2018. Recently, the band was awarded the Grammy Award in 2019.

Sources have estimated his net worth of around $1 million which he has earned from his professional career. Regarding salary and other possessions, there is no data available.

Dan Smyers married Abby Law after the engagement; Here is the whole details about their relationship, marriage and engagement