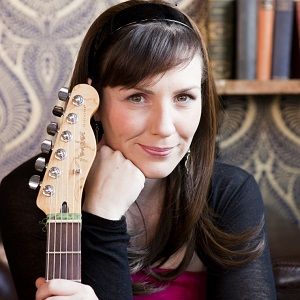 The 32-year-old British singer, Dani is an unmarried woman. As of now, she has kept all her personal life so secret that no one is aware of. Furthermore, she has never seen with any man in the public and media to date. Besides this, she has also kept herself out from the spotlight. Moreover, there is not even a single rumor of her. As per the reports, Dani is enjoying her single life and living elegantly.

Who is Dani Wilde?

Dani Wilde is a British singer-songwriter and guitarist. She has earned huge recognition as the British Blues Phenomenon. Furthermore, her 2015 album Songs About You charted in the I-Tunes Country Music Album Charts in 10 countries. Additionally, her single Loving You entered the European Country Music Chart’s Top 40.

Dani was born on 25 August 1985, in Hullavington, United Kingdom. Talking about her nationality, she is British and her ethnicity is unknown. From the beginning of her childhood, she had a keen interest in music and she also began to learn from a very early age. Concerning her education, Dani completed her graduation with her first class degree in Vocals at the Brighton Institute of Modern Music in 2005.

Dani began her professional music career in September 2007 as she was signed to the international blues record label Ruf Records. Just after a year, she launched her debut album Heal My Blues in January 2008. After a year, she landed her second album Shine along with the legendary record producer Mike Vernon. Back in May 2012, she released her third album, Juice Me Up. She has earned huge recognition as the British Blues Phenomenon.

Furthermore, her 2015 album Songs About You charted in the I-Tunes Country Music Album Charts in 10 countries. Additionally, her single Loving You entered the European Country Music Chart’s Top 40. Moreover, the veteran British musician has also toured across the UK, Europe, Canada, America, and Africa. Additionally, her single “R U Sweet On Me” was featured in NBC’s drama series Aquarius.

Furthermore, Dani has also collaborated with Samantha Fish and Cassie Taylor on the Ruf Records ‘Girls with Guitars Blues Caravan World Tour’. Besides music, she is also an advocate for children’s rights. As of now, she has worked with the charity “Moving Mountains” to help improve education for Street Children and Orphans in Embu, Kenya.

Being a famous musician, she earns a healthy amount of money from her profession. However, her salary and net worth are unknown.

As of now, she has not won any awards. Although, her songs have been charted in the top in many countries as well as loved by her fans.

Dani is not active on social media at all. As of now, she doesn’t hold any of these social accounts such as Instagram, Facebook, and Twitter.