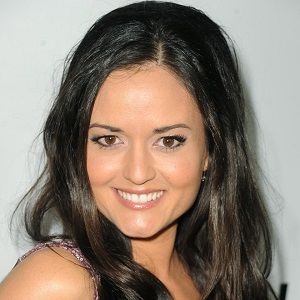 I love surprises - champagne and strawberries, all that pampering, romantic stuff. Guys ought to know how to pamper their women properly.

When you do take the home pregnancy test, it doesn't quite seem real. But when you see the baby and the heartbeat on the ultrasound, it's so incredible.

Believe it or not, lots of people change their majors and abandon their dreams just to avoid a couple of math classes in college.

Danica is a married woman.

Previously, she was married to composer Mike Verta on March 22, 2009.

The couple dated for more than eight years before getting married. Later in 2010, they welcomed their first child as a son named Draco. However, they couldn’t carry their marriage life for so long and divorced in February 2013.

After a year, she got engaged to her attorney boyfriend Scott Sveslosky on July 16, 2014. Since their relationship began, the lovebirds spent some romantic times together and finally tied their knot on November 15, 2014, in Kauai, Hawaii.

Who is Danica McKellar?

Furthermore, she came into the spotlight after appearing as Winnie Cooper in the 1988 television series The Wonder Years. Additionally, she has also appeared in several movies such as Good Neighbour, Black Hole, Heatstroke, and much more.

Talking about her nationality, she is American and her ethnicity is mixed(English, Scottish, German, Spanish, French, Dutch, and Portuguese). From the beginning of her childhood, she had a keen interest in acting and began to learn from a very early age.

Moving towards her education, Danica completed her graduation with a Bachelor of Science in Mathematics with highest honors at the University of California, Los Angeles.

Danica began her career with the 1992 movie Sidekicks. Later in 1988, she got huge recognition in the role of Winnie Cooper in the TV series The Wonder Years.

Furthermore, she has featured in many TV series such as Babylon 5, Sirens, Working, The Division, and much more. She has also appeared in the popular televisions show Static Shock as Freida Goren from 2000-2004.

Moreover, the American actress has been playing the role of Miss Martian in the TV show Young Justice from 2010 to 2013. Danica has been also acting in Project Mc2 since 2015.

Recently in 2017, she has also appeared in a couple of TV series which include Mommy I Didn’t Do It, Campfire Kiss, and Coming Home for Christmas.

Apart from TV shows, she has also done several movies in her career. Furthermore, her notable works include Heatstroke, 21 and a Wake-Up, Scooby-Doo! Abracadabra-Doo, and few more. In addition, she has recently appeared in The Jetsons & WWE: Robo-WrestleMania! as Judy Jetson.

Prior to this, she has also landed the role of Susan Malcolm in the 2014 film Where Hope Grows. Besides this, she has also featured in a music video of Avril Lavigne single Rock N Roll. Moreover, she has also published some books which include Kiss My Math: Showing Pre-Algebra Who’s Boss, Girls Get Curves: Geometry Takes Shape and a few more.

Her book McKeller Math is one of the New York Times bestselling series of math books.

As of now, she has won a couple of awards in her acting career. Danica has won the BTVA Television Voice Acting Award in 2013 and 2014. Previously, she has also received the OFTA Television Award and State Award in 2012 and 2002 respectively.

Being a popular actress, Danica earns a handsome amount of money from her career. Currently, she has a net worth of $3 million.

Danica McKellar has a height of 5 feet 4 inches and weighs 53 kg. Moreover, she has a beautiful pair of brown eyes and black hair. Besides this, her other body measurements include 33 inches bra size, 23 inches waist, and 34 inches hip. His dress size is ‎2 (US) and shoe size is ‎7 (US).