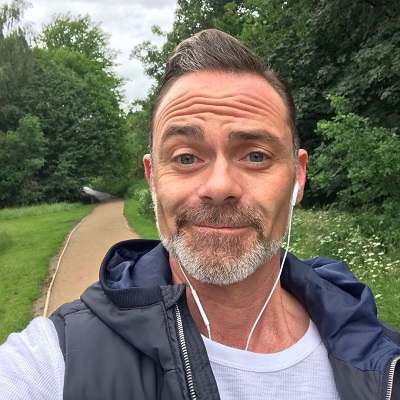 Previously, he was in a relationship with Stuart Hatton. His ex-boyfriend, Stuart is a model and dancer by profession. He also happens to be Mr. Gay UK 2013 & 2014.

The former couple first met at Stockholm Pride in the summer of 2017. Daniel shared the information via his social media posts. At the time, he also shared that he wants to get married to Stuart and start a family with him. However, they broke up with each other after two years of relationship in mutual understanding.

Prior to that, Daniel was linked with his co-star, Rob Mallard. However, they spilled after one of two months of dating. However, the former lover shares a very deep bond of friendship.

Who is Daniel Brocklebank?

British Daniel Brocklebank is a Best Actor Award-winning actor and theater artist. He is renowned as Bily Mayhew of the series Coronation Street.

Daniel Brocklebank was born on the 21st of December 1979 in Stratford-upon-Avon, Warwickshire. He is of British-Irish ethnicity.

He has a younger sister, Sophie Brocklebank. Sophie is a professional horse breeder. Once, she was also a part of the UK Olympic Equestrian Eventing team.

He completed his primary education at Butlers Marston School in his hometown. Later, he joined Kineton High School to complete higher education.

Since childhood, he developed a passion for acting. He started performing in local drama societies when he was ten years old. In addition to that, he also took drama classes too.

Moving forward, he made his first appearance in the children’s’s TV series, Brum under the Ragdoll production.

After the series, Brum started appearing in the various TV series of the BBC that includes Down to Earth, Born and Bred, Ed Stone is Dead, and many more.

Currently, Daniel Brocklebank is portraying the character of Billy Mayhew in Coronation Street. He has been playing the character in the soap since 2014. Till the date, he has completed around 452 episodes with the series. The character, Billy is one of the milestones of his career.

On the other hand, he also makes his appearance in theatre plays. Some of his theatre’s plays include Lord of the Flies, The Tamer Tamed, Cressida, and His Dark Materials.

Apart from TV and theatre, he is also popular for his movie appearances too. Back in 1998, he made his film debut through the movie, Monk Dawson where he appeared as the young Dawson. The same year, he featured Shakespeare in Love as Same Gosse.

Moving forwards, he appeared in the movies like The Hole, The Hours, and Release. Last, in 2015, he made his appearance in Soft Lad in the roles of Jules.

To date, he has not been through any sort of controversy that created a buzz in the media. Similarly, there are o rumors related to him.

However, his recent Twitter tweet has created some news in the media. With the tweet, he shared his experience of getting banned from the dating site. The actor joined a dating site to find love as his mother suggested.

However, an interesting turn of the event took place when he joined the site. The soap star got banned from the site as the site thought that he is impersonating himself.

Daniel Brocklebank has hazel eyes with brown hair. His height is around 5 feet 8 inches and has a decent weight with a slim body type.