Daniel Craig is an English actor. He is nominated for the BAFTA Award.

Daniel Craig was in the relationship with Fiona Loudon. No sooner the relationship turns into marriage when they tied the knot in 1992. They also have a daughter, Ella. The relationship, however, did not last long and ended up in divorce in 1994.
He was in a relationship with Geike Makatsch who was one of the German actresses. Their relationship lasts long for seven years until 2001. Following this, he dated Satsuki Mitchell and Sienna Miller.
In December 2010, he dated actress Rachel Weisz. They first met in 1992 in “Les Grandes Horizontales” and now each other. They had also worked together on the movie “Dream House”.
Rachel married Craig on June 22, 2011. The marriage ceremony was privately held in New York City with just 4 guests. The guests were his daughter, Ella, and Weisz’s son, Henry.
Craig and Weisz welcomed a daughter in September 2018. 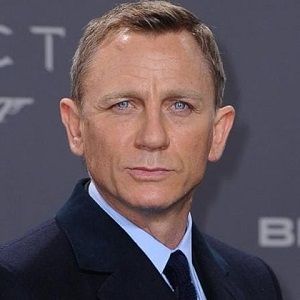 Being on your own would be sad, sick and weird. I don't trust myself. I need that balance.

It’s a huge challenge, a huge responsibility. Bond is a huge iconic figure in movie history. These opportunities don’t come along very often so I thought, ’Why not?’

I find it very easy playing Bond. I think he's hilarious. He gets himself into some extraordinarily funny situations.

Who is Daniel Craig?

Daniel Craig is an English actor. He is nominated for the BAFTA Award for his debut as James Bond in the 2006 movie, Casino Royale. Likewise, the features of various popular movies.

The actor then went on to portray Bond in three more movies: Quantum of Solace, Skyfall, and Spectre. He became globally known for his role as the new James Bond, the suave spy in the 2006 movie, Casino Royale.

Daniel was born on 2 March 1968, in Chester, Cheshire, England. His birth name is Daniel Wroughton Craig. His father’s name is Timothy John Wroughton Craig who was the landlord of the pubs ‘Ring o’ Bells’ and ‘Boot’s Inn’ in Chester England and also served as a midshipman in the Merchant Navy.

Likewise, his mother’s name is Carol Olivia who was an Art Teacher. The actor also has two siblings, one older sister named Lea Craig and another brother, Harry Craig.

Daniel has his primary school in Frodsham, Then he joins Holy Trinity Primary School in Hoylake. He couldn’t pass out the eleven plus there and attended Hilbre High School in nearby West Kirby.

He finally completed his secondary education when he was 16b yrs old. Daniel has also joined Calday Grange Grammar School as a sixth-form student. He is an alumnus of the National Youth Theatre and graduated from the Guildhall School of Music and Drama in London.

Daniel Craig started his career by playing the debut role in the drama, ‘The Power of One in 1992. In the movie, he has portrayed the role of an Afrikaner soldier. Likewise, after this debut, he receives a great chance to perform in a large movie. Craig then starred in various movies including, ‘Sharpe’s Eagle,’ ‘Kiss and Tell,’ ‘A Kid in King Arthur’s Court,’ and so on.

Not only that he made his debut in movies but he also has his performance on two episodes of the series, ‘Zorro,’ in 1993. He has his normal life starring in some series. But in 1996 when he debuts for the TV series, ‘Our Friends in the North‘ it uplifted his career a lot.

The great success of the series helps to recognize Craig’s abilities and talent all over and he gains a lot of popularity. Likewise, 1998 was also his successful year as he has his career uplifting with mots of his successful movie. His biopic, ‘Love is the Devil received well comments and was commercially so good.

After his super success in ‘Love is the Devil,’ he consequently receives the chance to perform in the next historical biopic ‘Elizabeth,’ which was released in 1998. The film was widely commended for its subject & the perfect portrayal of the character as a monk. Craig has his trend to have his movie successful accordingly with the release of the World War I saga, ‘The Trench.’ It is a movie that was a blockbuster and allows him to showcase his talent as an actor. Likewise, his other movie released in the same year includes, ‘Hotel Splendide,’ ‘Some Voices,’ & ‘I Dreamed of Africa.’

Craig has his powerful performance in ‘The Mother,’. He has a power-packed performance in the movie and receives great success. Proving his talent he plays another violent crime thriller role in, ‘Layer Cake.’ He then played the character of Joe in the movie, ‘Enduring Love.’

In the year 2012, Craig also has a great performance reprising his role as James Bond 007 in his next outing titled, ‘Skyfall.’ The film surpassed all the 22 Bond movies released earlier regarding positive reception and box office collection.

Other than films & televisions, Craig has lent his voice & image of James Bond to some video games such as the Nintendo 64, Wii game GoldenEye 007, and James Bond 007: Blood Stone, Xbox 360, Nintendo DS, PlayStation 3, & Microsoft Windows.

Daniel has a blockbuster movie and his talent is appreciated by everyone. As he has good performance, he has been nominated several times for prestigious awards over various years respectively.

Craig performed in various blockbuster movies and so must have good earnings. His net worth is $170 million as of 2022. He has his house in Sunninghill outside Ascot.

He is not involved in any of the rumors. Once it was rumored that his role would be replaced but he continues it.

Daniel Craig has an athletic built body standing with a height of 5 ft 10 inches (178 cm).  The actor weighs 78 kg (172 pounds). He has blond colored hair and blue colored eyes.

The actor is active on different social media and keeps on updating them. He is active on Instagram with more than 60.4K followers.

He is active on Twitter and has more than 8.99K followers. The actor doesn’t use Facebook but he has different other fanmade accounts.