Daniel Hernandez (6ix9ine) is currently in a relationship with Leezah. The pair have been seen together on several occasions. Furthermore, Hernandez also has a daughter whose mother is unknown.

Previously, he also dated Celina Powell for a brief amount of time. 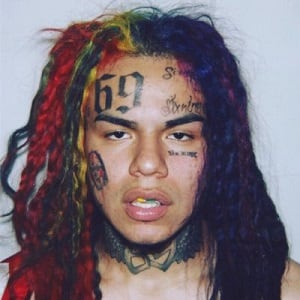 Who is Daniel Hernandez (6ix9ine)?

Daniel Hernandez (6ix9ine) (6ix9ine) is an American rapper. His debut single, ‘Gummo’ peaked at number 12 on the US Billboard Hot 100 and helped him garner widespread fame.

This wrapper was fulfilling his sentence in jail. But due to his asthma problem and COVID-19, he requested the court to release him and allow him to spend the rest of his punishment at his home.

On April 2, 2020, his lawyer said that his request is granted by the court.

Hernandez was born in Bushwick, New York City, New York on May 8, 1996. He had a rough childhood growing up after his father died in 2009. Additionally, he became interested in the world of rap at an early age.

Talking about his education, Hernandez was expelled from school in 8th grade and did not return.

Hernandez initially worked several jobs including selling marijuana. After 2014, he began releasing rap songs. He released multiple tracks and videos later including ‘Scumlife’, ‘Yokai’, and ‘Hellsing Station’ among others.

Additionally, Hernandez received fame after his July 2017 Instagram post went viral which turned him into an internet meme. In addition, he released his commercial debut single ‘Gummo’ on November 10, 2017.

Hernandez also released his debut mixtape, ‘Day69’ on February 23, 2018. Furthermore, some of his other singles include ‘Gummo’, ‘Kooda’, and ‘Keke’. His mixtape ‘Day69’ debuted at number four on the Billboard200 album chart.

Hernandez has not revealed his current salary. However, he has an estimated net worth of around $8 million at present.

Hernandez has been part of several controversies in his career. He pled guilty to one felony count of the use of a child in a sexual performance in October 2015.

Additionally, he was charged with three counts of the offense after he had sexual contact with a 13-year-old girl in February 2015. In addition, Hernandez allegedly choked a sixteen-year-old in Houston’s Galeria Mall in January 2018.

He has also been part of several other controversies due to his feud with Chief Keef and Trippie Redd. Furthermore, more recently, Hernandez was reportedly kidnapped and beaten in a Brooklyn robbery.

He has been in controversy when he appeared in court, he was pleaded not guilty to racketeering and firearms charges.

Hernandez donated an amount of around $200k to a charity organization. However, this money was not accepted by them.

Talking about his body measurement, Daniel Hernandez has a height of 5 feet 5 inches (1.68 m). Additionally, he weighs around 64 kg or 141 pounds. Furthermore, his natural hair color and his eye color are dark browns.