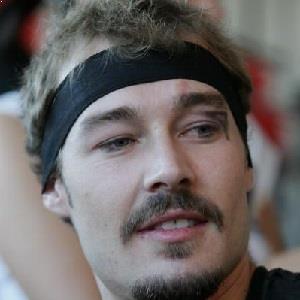 I have never had a social life, don't ever want one because it's boring. I'm just not very good with people, and you meet people every night who expect you to be this rock star with these developed social skills, which I don't have.

I try to stay positive by focusing on how much I'll appreciate my health if I get better.

I am doing everything humanly possible to try and get well, but lately things have just kept getting worse.

I have not really experienced any significant conflict with anyone in regard to my choice to be vegan, although going out to eat is hard sometimes.

Daniel Johns was previously married to long-time girlfriend, actress, model and singer Natalie Imbruglia. The pair were engaged in 2002 and they later married on the New Year’s Eve 2003. However, the marriage did not work out and they announced that they were divorcing 4 January 2008.

Who is Daniel Johns?

Daniel Johns is an Australian musician, singer, and songwriter. People mostly know him as the former frontman of the rock band ‘Silverchair’. The Rolling Stones ranked him at number 18 on the list of The 25 Most Underrated Guitarists in 2007.

Johns was born in Newcastle, Australia on April 22, 1979, to parents Greg and Julia Johns. Throughout most of his childhood years, he grew up in Merewether, New South Wales, Australia. Additionally, he has two younger siblings. He became interested in music since his childhood years. He is of Australian nationality. Furthermore, he belongs to English ethnic background.

Talking about his education, Johns graduated from Newcastle High School in 1996.

Johns initially formed a band with friends Ben Gillies and Chris Joannou at the age of 12. Their band was called ‘The Innocent Criminals’. The band’s song ‘Tomorrow’ won a competition which garnered the band their well-deserved fame. After changing their name to ‘Silverchair’, the band accepted a three-album deal from Sony Music in 1994. Their first album was titled ‘Frogstomp’, which was released in 1995.

Furthermore, Johns released the studio album ‘Talk’ as a solo artist on 22 May 2015. As a lead artist, he has worked on singles like ‘Cool on Fire’, ‘Going on 16’, and ‘Modern Conversation’. Johns has worked with artists including ZHU, What So Not and Slumberjack.

Johns won the Producer of the Year at ARIA Music Awards in 2002. Additionally, the band ‘Silverchair’ has won 21 ARIA awards to date. Furthermore, he also garnered the nomination for Best Male Artist at the ARIA Music Awards of 2015.

Johns has not revealed his current salary. However, he has an estimated net worth of around $ 20 million at present.

Johns has been part of several controversies in his career. He became part of a controversy in 2007 after he claimed that he had shared a joint with Natalie Imbruglia, Peter Garrett, and Bono of U2. Later, Tony Wood suggested that Peter Garrett must be subjected to a drug test. Johns stated that he was only joking regarding the matter. Additionally, Johns was arrested for driving under the influence in 2014. At present, there are no rumors concerning his life and career.

Talking about his body measurement, Johns has a height of 5 feet 10½ inches (1.79 m). Additionally, hair color is blonde and eye color is blue.