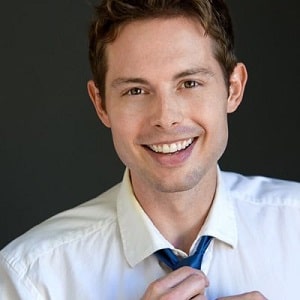 Daniel Kountz is currently in a relationship. He has been dating actress Kimberly J. Brown. Kimberly is best known for her appearances in the first three ‘Halloweentown’ movies.

Kimberly posted a kick pic on International Kissing Day. The couple is enjoying their relationship but they have not revealed their future goals. Hope, they will soon get married. He is currently living in Los Angeles, California.

Who is Daniel Kountz?

Daniel Kountz is an American actor who is known for his performances in ‘Mad Men’ in 2007, ‘Quintuplets’ in 2004, and ‘Halloweentown II: Kalabar’s Revenge’ in 2001.

He was born on October 16, 1978, in Portland, Oregon, USA. His birth name is Daniel Dennis Kountz II and he is currently 40 years old. He has got a nickname, Dann’o. Information regarding Daniel’s father, mother, siblings, and childhood are unavailable.

Daniel holds American citizenship but his ethnicity is unknown.

Talking about Daniel’s education history, he has not revealed anything about his studies.

He got the taste of acting career from the third grade in which he appeared as Tiny Tin in a school play.

Daniel Kountz appeared as Ray ‘The Hood Wood’ in ‘Fifteen and Pregnant’ alongside Kirsten Dunst in 1998. He has portrayed the role of Kal in ‘Haloweentown II: Kalabat’s Revenge’ alongside Kimberly J. Brown in 2001.

He also made his appearance as an avatar in an episode of ‘Ghost Whisperer’ titled ‘Ghost in the Machine’ and also appeared in ‘Just Shoot Me’, ‘3rd Rock from the Sun’, ‘Crossing Jordan’, and few others.

It seems the 40 years actor has not been awarded and nominated for his work till now.

He has an estimated net worth of around $800,000 and he has earned that sum of money from his professional career.

There was a rumor about the relationship of Kimberly J. Brown with Daniel but this rumor proved true as they have now dating officially.

Daniel Kountz has dark brown hair and light brown eyes. Other information regarding his height, weight, etc. are unknown.