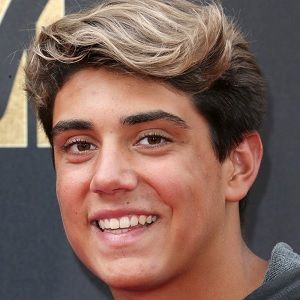 What is the relationship of Daniel Lara?

Daniel Lara is currently single. He is a bit young to involve in a relationship. However, after gaining enormous fame the case might have altered. In TheEllenShow, he personally admitted that he was approached by many girls after being famous. But as of now, he is not starting a new relationship.

Although there are not any rumors or news about him dating, he might be seeing someone as it is not hard for him to pick girls. So, we can only wait and see if he decides to reveal that information to us if there is any.

Who is Daniel Lara?

In 2016, the video Damn Daniel which featured Daniel and the voice of his friend Joshua Holtz went viral with more than 50 million views on the internet. He is currently a high school student at Riverside Poly High School.

Daniel Lara was born on April 4, 2001, in Riverside, California, US. But as of now, the identity of his parents is currently under shades. He has one brother, Reggie Lara.

Talking about his childhood, he was raised in his hometown. However, he has not shared many of his childhood details and memories with us until now.

As regards Daniel’s academic qualifications, he is currently a student at Riverside Poly High School in California. And, he is yet to receive higher education.

Daniel rose to fame after he posted the video under the title, Damn Daniel, in 2016. Before that, he was just an ordinary person. The video was a collection of Snapchat videos that he posted before. Narrated by his friend Joshua Holz with distinctive words, ’Damn Daniel’ went viral overnight.

He also made white Vans widely popular as he wore the shoes in his video. Because of this, one of the white Vans on eBay was bided up to $300,000.  Furthermore, TheEllenShow quickly invited him to the show, which raised his fame much higher.

In 2016, Time magazine included Daniel on the list of ‘The 30 Most Influential People on the Internet. In addition, Vans decide to supply him with white Vans for a lifetime.

Daniel Lara: Salary and Net Worth

Currently, there are no details regarding his financial status as he has not shared any information. His net worth and salary are not known.

Daniel is 5 feet 7 inches tall and weighs about 65 Kg. He wears the shoe of size 9. Furthermore, he has brown hair and brown eyes. But we are not aware of his additional details of body measurement.

Also get to know more about the birth facts, education, career, net worth, rumors, height, and social media of different personalities like Connor Joyce, Abby Roberts, and Salice Rose.