Talking about his love life, Daniel Levy is presently single and he is not dating anyone at the moment. He lives with his dog, Redmond.

On the other side, Levy has openly stated his sexuality in the public. In a 2020 interview with Andy Cohen, the star mentioned he is gay and has been out since he was 18. He was called a member of the queer community during an interview with Flare in 2015.

The star’s mom supported him in coming out and accepting his homosexuality. Likewise, he told Vanity Fair that his favorite quality in a man is humility. 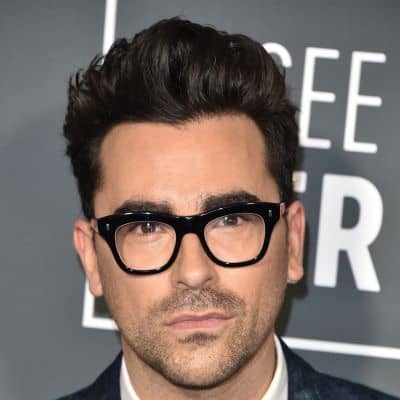 Daniel Levy is a well-recognized Canadian actor, writer, director, comedian, and producer. Levy is widely famed for being the son of the famous star, Eugene Levy and his wife, Deborah Divine.

Moreover, he became the first person to win a Primetime Emmy Award in all four major disciplines in a single year.

Daniel Levy was born on 9 August 1983. At present, his age is 37 years old. Likewise, his birthplace is Toronto, Ontario, Canada.

Daniel is the son of his father, Eugene Levy whereas his mother is Deborah Divine. Moreover, he has a younger sister, Sarah Levy. All of his family members are associated with the acting industry.

Talking about his nationality, Levy holds a Canadian identity whereas his ethnicity is Jewish-Protestant.

Daniel started his career as one of the original seven co-hosts on the now-defunct MTV Canada flagship series, MTV Live. The star came into the limelight after being the co-host of MTV Canada’s The After Show with Jessi Cruickshank and its various incarnations like The Hills: The After Show and The City: Live After Show.

He then wrote, produced, and starred in his own Christmas Special for MTV, Daniel Levy’s Holi-Do’s & Don’ts; and co-hosted the MTV Movie Awards Red Carpet, the X-Factor pre-show, and national coverage of the Vancouver 2010 Winter Olympics for CTV.

Being an actor, Daniel featured in a four-episode story arc of the Canadian TV series Degrassi: The Next Generation. In 2013, the star formed Not a Real Company Production along with his father and principals Andrew Barnsley and Fred Levy. They made a television pilot with CBC resulting in Schitt’s Creek.

In the show, Levy featured alongside his father, sister, Catherine O’Hara, Annie Murphy, and Chris Elliot. It’s Not a Real Company Productions’ first television series. The Canadian actor has been nominated for several awards including the Canadian Screen Awards for writing and acting, winning the awards for Best Comedy Series for his work on Schitt’s Creek.

Additionally, Levy announced that the series was renewed for a sixth and final season in March 2019. He featured alongside Bette Midler, Kaitlyn Dever, and Sarah Paulson in the HBO television film, Coastal Elites in September 2020.

A multi-talented Canadian personality, Dan has earned a massive amount of money from his profession. He has been active in his profession from the year 2006 till the present.

In November 2019, the star paid $4.13 million for a large mansion in the Los Feliz area of Los Angeles. He paid around $400 thousand over asking.

Dan has been rumored to marry an American model and actress, Rachel Specter. However, the news is false as he has openly stated he is gay.

Other than that, he has never been part of any controversial matter or rumors till now.

37 years old star, Levy has dashing looks, a charming smile, and an attractive personality. He stands at a height of 5 feet 11 inches. Also, he has a balanced bodyweight of 71 kg.

Furthermore, Levy has brown eyes whereas his hair is black.

Regarding his social media presence, Daniel Levy is an active personality on social media. Daniel has more than 4.4 million followers on his official Instagram account @instadanjlevy.

He is also active on Twitter with around 1.2 million followers.

Moreover, Levy is also available on Facebook with nearly 1.8 million fans and supporters.