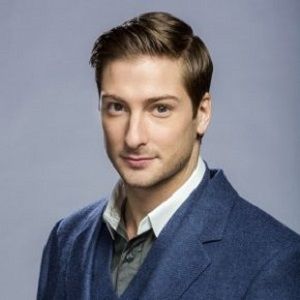 We walked about 14km (8.7miles) to get to this temple in Tokyo. I prayed for more comfortable shoes.

What is the relationship of Daniel Lissing?

Daniel Lissing the Aussie actor is married to his girlfriend, Nadia in June 2020.

Their wedding ceremony was low-key due to the covid held in California. The couple was accompanied by two close friends who acted as witnesses during the nuptials.

He was engaged to his now-wife, Nadia on 24th October 2019. He shared the news via his Instagram handle.

The couple keeps sharing their personal pictures, and vacation snaps as well.

Who is Daniel Lissing?

Daniel Lissing is an Australian actor. He is also a musician, filmmaker, and traveler.

He is best known for his role as Petty Officer James King in the short-lived ABC drama Last Resort (2012-2013).

He is also popular for the portrayal of Jack Thornton in the TV series When Calls the Heart (2014). Daniel is also famous for playing Conrad De Groot in Crownies in 2011.

Daniel made his acting debut playing a small role in the 2001 TV film Pizza.

In 2006, he appeared as a guest in the successful Australian series Home and Away, in which he played the firefighter Dave Elder.

In 2104, he joined the cast of When Calls the Heart in a regular role. Since then, he portrays the character Jack Thornton in the series.

His net worth is estimated to be $1 Million(US).

Speculations are that he is having an affair with his on-screen actress Erin Krakow.

However, the news is false as Erin has congratulated Daniel on his engagement with his girlfriend, Nadia.

Daniel Lissing has a height of 5 feet 11 inches. His hair color is Light Brown and his Eye color is Brown.