Posted by MarriedBiography Posted on June 10, 2020 | In Married , Net Worth , Wedding
Share this 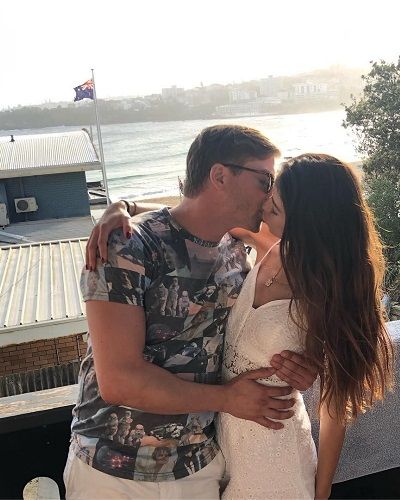 Actor Daniel Lissing is married to his fiance Nadia. A few days back sources revealed that the two are officially married and their wedding was held earlier in 2020 in California.

“It was a pretty fast and easy decision to make. When you’ve met your ‘one,’ you just want to start your married life together as soon as possible,”

“The best part is, we get to celebrate with all our friends and family next year, too… We’re married now and we’re looking forward to everything ahead of us.”

Daniel and Nadia’s wedding was a very small and sweet ceremony as per Daniel. They were accompanied by two close friends who acted as witnesses. Likewise, he said,

“We’re saving all our personal touches and extravagant decorations for our big family wedding next year. Wedding planner and all. It’ll be an awesome wedding, but very different to the first one just for us.”

At present, the couple is enjoying their newlywed life at home together during this quarantine. They had planned their dream wedding in Bali which got postponed due to Coronavirus pandemic. They are still sticking to their plan of Bali for their big day and have moved their big wedding to 2021. As they do not want to risk any of their friends and family.

Daniel Lissing proposed Nadia and she said yes which he announced through his Instagram account on 23 October 2019. He proposed with the stunning Tiffany’s engagement ring which was a princess cut with a platinum band. It had small diamonds around the bigger diamond. He was very thoughtful in buying something timeless and everlasting.

Nadia did not saw that the proposal was coming. It was a surprise for her and she was overwhelmed with happiness. She said,

“There were lots of tears of joy, followed by dancing around the house together! The ring is so, so beautiful,”

Daniel and Nadia met two years ago and fell in love. His wife Nadia has not revealed her last name as she is trying to protect her family’s privacy. They met each other in Reykjavik, Iceland. Nadia said,

“I was traveling after graduating [with] my masters in business. A very happy, slightly intoxicated Australian approached me in a bar. My first impression was, ‘This guy is hot but he might be a little crazy,'”

“I’d never met anyone like him before, that’s for sure! I felt an instant connection.”

“There was an instant connection, deeper than anything physical, mental or even explainable. The way he makes me feel is as if we’ve always known each other. He just get me at my core and I get him like no one else,”

She did not have any clue that he was an actor until they met each other for the third-fourth time. She became his biggest fan and is happy that they are together. It was strange to her at first because he was famous. When she met his fans who were inspired by him she felt proud.

How much is Daniel Lissing net worth?

The estimated net worth of Daniel Lissing is $1 million. Daniel has worked in many movies and TV series. In the year 2009, he appeared in the short movie Whiteline as Matt. After that, he appeared in Multiple Choice, The Game, Fidelity, Entwined, The Cure, John Doe: Vigilante, and The Answers.

His TV series roles include in Pizza, Home and Away, Out of the Blue, Packed to the Rafters, Underbelly: A Tale of Two cities, Cops L.A.C., Crownies, Last Resort, When Calls the Heart, Timeless, Blindspot and The Rookie.

Daniel Lissing is an Australian actor. He is also a musician, filmmaker, and traveler.

He is best known for his role as Petty Officer James King in the short-lived ABC drama Last Resort (2012-2013).

Similarly, he is also popular for the portrayal of Jack Thornton in the TV series When Calls the Heart (2014). Daniel is also famous for playing Conrad De Groot in Crownies in 2011. Read more bio…

New fatherhood! The girlfriend of actor Alex Kompothecras gives birth to a daughter!
Tags : ‘Timeless’ Actor When Calls the Heart