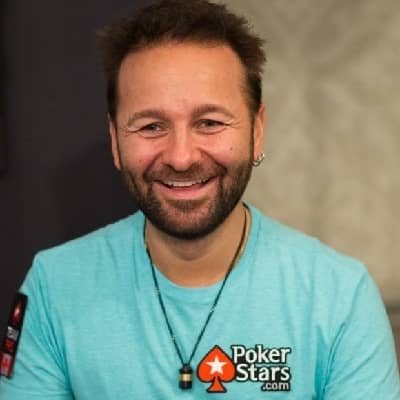 Daniel Negreanu married his wife after they dated again!

He and Amanda dated in the past before Daniel’s relationship with Marissa Rachelle in 2014. Their relationship didn’t get along and the couple split up. However, their separation leads their bond to the next level.

Daniel reconnected with Amanda and they began dating in 2018. He proposed her being on his knees in Jan 2019. The pair married on May 17, 2019, four months after their engagement.

The marriage ceremony was held at Terranea Resort in Rancho Palos Verdes, California. Daniel looks handsome wearing a blue suit to the ceremony, while his wife wore a V-neck lace-pattern white wedding gown.

Daniel was firstly married to a Michigan girl Lori Lin Weber. However, they ended their relationship and divorced after two years.

In Nov 2007 he has posted a blog regarding his reason for the divorce. He share that he regretted leaving Lori. However, he claims that it was the best idea for them and they are still good friends.

He followingly was hooked up with a Hungarian beauty queen, Krisztina Polgar.

And in 2014 he was in a relationship with Marissa Rachelle Rodney. She is a stylist at Royal Tease Hair and Makeup in Las Vegas. They share a good bond also shared various lovely moments together. In spite of it, the pair ended abruptly when Negreanu announced their split in June 2018.

Who is Daniel Negreanu?

Daniel Negreanu is a Canadian professional poker player. Daniel is considered one of the best poker players and has amassed numerous titles like World Series of Poker Bracelets, and various championship titles.

He is also the youngest WSOP bracelet winner in history.

In October 2020, Daniel was considered one of the twelve individuals named in a $330 million dollar defamation lawsuit brought by poker professional Mike Postle. However, the lawsuit was dropped in April 2021.

Negreanu celebrate his birthday on July 26, 1974. He was born in Toronto, Ontario, Canada. He grew up with elder brother Mike Negreanu. Daniel Negreanu is of Romanian ethnic group and holds Canadian ethnicity.

His father’s name is Constantin Negreanu. He worked as an electrician and sold confectionery.  Likely, his mother’s name is Annie Negreanu. His parents were Romanian immigrants and moved to the US for new life. However, they settled in Toronto.

Daniel was very ambitious from his childhood. In an interview, he shared that he thought of being rich and moving to California when he was just 4 yrs old.

Daniel has his schooling at A. Y. Jackson Secondary School. Then he attended Pineway Public School.

The principal complained about his poor manners to Daniel’s mother. Later on, he dropped out of high school and started his career in poking.

At a young age, Daniel Negreanu learned to play poker. He was just 16 yrs old when he spends his time in pool halls, hustling, betting on sports, and playing cards.

And as of now, Negreanu is a professional land well-known cash game player. He has also played and won various Poker Championships.

In 2007, Daniel Negreanu signed with PokerStars. However working together for around 12 years, they parted away on May 23, 2019. He captured and won two WSOP bracelets and another WSOP Player of the Year award in 2013. Since then he has captured another five bracelets. As of 2020, his winning tournament exceeds $42,000,000.

Daniel Negreanu has amassed a total of $65 million net worth as of 2022.

His total live tournament winnings exceed $42,000,000 in Jan 2020. He has accumulated a lot of money by winning the championship like

The poker player up to now has won 6 bracelets and their prize are showed as below:

Daniel Negreanu has been involved in various controversies. He quits EPT Barcelona after a controversial ruling and was allegedly not in his seat.

Daniel was recently banned from streaming on Twitch. It was after a recent outburst during his live streams playing in the WSOP Online on July 2020. One was when he seemed to break his computer and in another, he went on a vulgar rent after someone commented about his wife.

Daniel Negreanu stands tall at a height of 5 feet and 9 inches. His body mass is around 72 kg. With brown hair, he has beautiful hazel eyes.

Similarly, Daniel Negreanu launched his YouTube channel on Oct2, 2006, and has 617 K subscribers as of now. He is also active on other social media sites like Spotify, Sticher, Twitch, iTunes, and others.