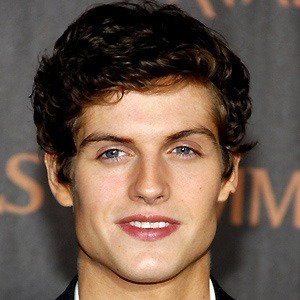 What is the relationship of Daniel Sharman?

Regarding Daniel Sharman’s love life, he first dated American actress and model, as well as his co-star, Crystal Reed, from the year 2012. But the couple broke up when he started dating Gigi Hadid in the year 2013.

Daniel and Gigi were in a relationship for two years and then they broke up too following Gigi dating Zayn Mallik.

Then he dated Asha Leo for a short time from Jan 2015 till July 2015. Now, this English actor is possibly single and is focusing on a career.

Who is Daniel Sharman?

Daniel Andrew Sharman is an English actor. He is best known for his role as Issac Lahey in the MTV supernatural drama series Teen Wolf. He started his career at the age of nine.

Now he had a supporting role opposite Maggie Grace in the 2013 TV movie When Calls the Heart. His performance in the films Immortal’ and ‘The collection’ along with his recurring roles on television series has sealed his career in the entertainment industry.

Not much is known about his father and mother except for the fact that his parents have always been his greatest support since childhood and backed his dreams.

His nationality is British and his ethnicity is English.

Sharman attended the private boarding school at Mill Hill School and later on the Arts Educational School both in London. During his school life, he used to act and play different characters that made it to the famous Edinburgh Fringe Festival.

Then after he studied at the London Academy of Music and Dramatic Art gaining a bachelor of art degree in acting.

It can be said that Daniel Sharman started his career at the age of nine. He knew what it takes to be an actor and signed up for the audition at the ‘Royal Shakespeare Company’.

He was selected for the plays ‘Macbeth’ and ‘Henry VI out of a hundred children. His debut role was in the film ‘The Last Days of Edgar Harding followed it up with the 2010 film ‘Immortals’ in which he played a Greek god.

He became a popular face on the supernatural TV series ‘Teen Wolf’ after being cast for the role of Issac Lahey. He met with a string of success on Television with his appearances in short films like ‘Drone’, ‘The Julliard of Broken Dreams’, and of course with an outstanding performance in the TV series ‘The originals’.

Recently, he guest-starred on ‘Mercy Street’ and plays Troy in the series ‘ Fear the Walking Dead.

As of 2022, this actor has a net worth of $500 thousand. However, his salary and other incomes are not disclosed.

There are no controversies about Daniel but he does have some rumors to talk about. It was rumored that he won’t return to the TV series Teen Wolf.

Daniel Sharman has dark brown hair and blue eyes. His weight is 82 kg and his height is 6 ft 2 inches.

Daniel is highly active on social networking sites such as Instagram and has around 2.9 million followers. He is also active on Twitter and Facebook. He has around 1.1m and 140k followers respectively.