Daniel Tosh is an actor, comedian, TV host who hosted a show titled Tosh.0. Daniel is married to his girlfriend since 2016. 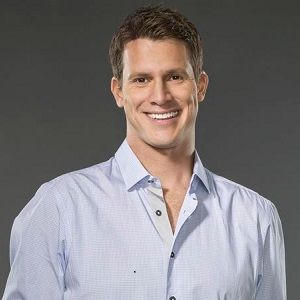 It's not a stereotype if it's always true.

It's funny... you can make fun of AIDS or Haiti, but if you make fun of some starlet in Hollywood's looks? That's like the one thing... the line you are not to cross.

I really don't work a whole lot as far as touring, but I do stand-up every night of my life, no matter where I am.

Daniel Tosh is currently married. He exchanged the vows with Carly Hallam on 15 April 2016. Carly is an actress and is known for her film New Low.

He was in relation to model Megan Abrigo from 2009. They were mostly spotted together and have been spotted in places like Gansevoort South hotel in Miami Beach, Florida.

In 2014, Daniel had talked about his marriage with a ballerina, which was later put off as a joke. He is involved with charity work and fund-raising for his sick friends.

But in 2014 his jokes became the problem in their relationship after which they supposedly split. Daniel was rumored to have gay inclinations and was seen with some male friends. He too had jokingly admitted to it, though this has not been confirmed.

Who is Daniel Tosh?

Daniel Tosh is an American comedian, actor, voice actor, writer, TV host, and producer. He is known for his offensive and sarcastic type of comedy on his TV shows.

His show ‘Tosh O‘ is a hit show on Comedy Central.

Born as Daniel Dwight Tosh born on 29 May 1975 in Germany. He spent his early life and grew up in Titusville, Florida. He is of Americal nationality and his ethnicity is Mixed (Scottish, Irish, Swiss, and German).

His father worked as a Presbyterian Minister. His father is a preacher. He has 3 siblings; a brother and two sisters. He suffers from social anxiety and obsessive-compulsive disorder. His brother is also very hilarious and funny as Daniel as tweeted by a comedian Jon Reep.

Talking about his education, he attended Astronaut High School till 1993. He did door-to-door salesmanship in his childhood to assist his family income. For three years. He attended the University of Central Florida and obtained a degree in marketing.

Daniel Tosh started his career as a telemarketer at the Central Florida Research Park. But it soon dawned on him that he was not made for an office job.

He shifted to Los Angeles to try his hands in the entertainment line. He toured with the comedy club and was part of ‘Just for Laughs‘ in Montreal in 1998. His first big break came when he performed on ‘Late Show with David Letterman’. Other shows followed suit.

Daniel Tosh also did some local comedy shows, radio shows,  and commercials. He also proved his worth as an actor. His comedy shows on Comedy Central soon became popular. He usually adopts sarcasm in his shows which are liked by many but also disliked by a significant number of people.

He has earned through his various comedy programs, tours, acting, and endorsements. His net worth is estimated to be $ 10 million. He also proved his worth as an actor.

His comedy shows on Comedy Central soon became popular. He usually adopts sarcasm in his shows which are liked by many but also disliked by a significant number of people. He is well recognized for the show which was air on Comedy Central, Tosh .0.

Daniel has appeared in the hit shows like Jimmy Kimmel Live!, Premium Blend, Loveline, The Bob & Tom Show, Kevin and Bean, and The Tonight Show with Jay Leno.

Other TV shows in which he appeared are  Live at Gotham, Daniel Tosh: Completely Serious, Happy Thoughts, Brickleberry, and Comedy Central Presents.

He has earned through his various comedy programs, tours, acting, and endorsements. His net worth is estimated to be $ 10 million.

Daniel Tosh had talked about his marriage with a ballerina: but the marriage is probably a hoax. He was rumored to be gain back with model and actress, Megan Abrigo, but this could not be authenticated. He was assumed to be gay but no further proofs for the same were available.

His shows and statements have also been controversial and his black comedy is not liked by all. He has time and again been criticized for his insensitive statements on rape, sexuality, marriage, relations, homosexuality and the like.

His sarcastic and provocative comments on his show are both its weakness as well as the show’s strengths since such controversial statements help him garner TRPs (television rating points) for the show. His provocative style of comedy is a source of displeasure for many people.

Daniel Tosh has a height of 6 feet 3 inches and weighs 89 kg. His eye color is dark brown and hair color is also dark brown.

Other information on his body measurement such as shoe size, chest, biceps, etc. is not known.

Daniel Tosh broke up with his long term relationship with Megan Abrigo and now seems hook up a Ballerina!!! Will he marry Bellarina?