Daniela Ruah is a Portuguese-American actress who was featured as the crime fighter to CBS. Daniela is married and a mother of two. 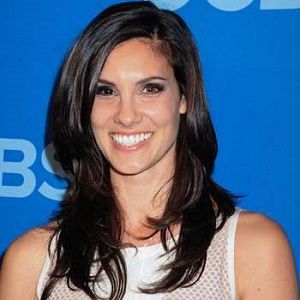 I do have a huge fascination for science, and I love to hear what my dad has to say. He used to take me into minor surgeries when I was a kid and let me watch, so I definitely have a passion for it, but it's not as big a passion as I have for acting and creating characters

It's a birthmark called nevus of Ota. It covers the whole white of my eye and darkens it. The square of the eye, the white part, is completely dark on my right eye, not just the iris

No actor in the world started off at the top.

Daniela is a married woman. She is married to David Paul Olsen. He is a Stunt Performer. The couple tied the knot on June 17, 2014, in the coastal town of Cascais, Portugal.

Who is Daniela Ruah?

Daniela Sofia Korn Ruah is a Portuguese-American actress who hails from Portuguese.

She is renowned for her role as an NCIS Special Agent, Kensi Blye which was featured in the CBS series NCIS: Los Angeles.

Her mother’s name is Catarina Lia Katia Azancot Korn and her father’s name is Moisés Carlos Bentes Ruah. Both her parents were in the medical field. Her father is an ENT surgeon whereas her mother is an otologist. She does not have any siblings.

Daniela was admitted to an English medium school when she was 5 in Portugal. Then she attended the Saint Julian’s School, located in the Greater Lisbon locality.

After graduating from school, she joined London Metropolitan University. From London University, she graduated with a Bachelor of Arts degree.

In 2007, she to learn acting she moved to New York and went to Lee Strasberg Theatre and Film Institute.

Daniela Ruah started her acting career in her teenage days and acted in the Portuguese soap opera, Jardins Proibidos (“Forbidden Gardens”) when she was just 16 years old.

She participated in the Portuguese reality show, Dancing with the Stars and won the competition. She was starred as a Special Agent Kensi Blye in NCIS: Los Angeles. The show was broadcasted on September 22, 2009. In 2011, she was featured as a guest appearance on the series Hawaii Five-0.

At Hayworth Theatre, she was seen in a dramatic play Proof in the year 2013. Her recent work is to co-host the reality show Eurovision Song Contest aired from 8 January 2018 along with Catarina Furtado, Sílvia Alberto, and Filomena Cautela.

She has been awarded the Asians on Film Festival Award for Best Ensemble Cast – Short Film in the year 2011 for her movie, Tu & Eu.

This actress’s net worth is estimated to be around $7 million and her salary per annum is $823,529.

Talking about the rumors and controversies of this actress, there is no information available on it from any sources.

The tall and beautiful Daniela Ruah has a height of 5 feet 8 inches and weighs 56 kg. Her hair color is dark brown and her eye color is brown.