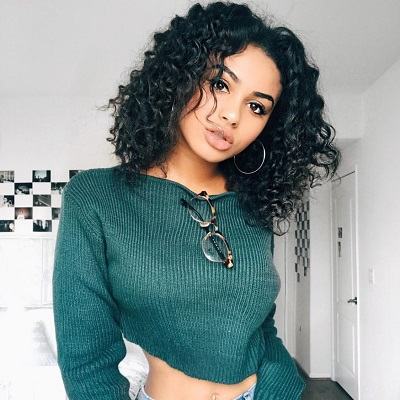 Currently, Daniella Perkins is in a relationship.

Daniella’s Instagram post shows that she is dating Justin Robbins, since the New Year’s party 2020. She also said that she found a guy and convinced him to bring to this new year party. She also wishes all his followers a happy new year.

Previously, she dated Zach Clayton in 2017. Zach is a singer, rapper, YouTuber, and social media personality.

Who is Daniella Perkins?

She is known for her work on Knight Squad as Ciara, Blurt Milly as Turkel, and Girl Meets World as Zoe.

As of September 29, 2019, animated mini-series, Middle School Moguls was released. In this series, she gave her voices as Winnie, alongside Jane Lynch.

Her 3 years younger sister, Devenity Perkins and she grew up with their mother.

In 2008, they both started a site called WzThe Buzz. This site gives review about restaurants, places, fashion and more. Later it became a business in 2011.

They do not reveal any names of their families member.

Her cousin’s name is Jeremiah Perkins, who is the star of web series, Chicken Girls.

She started her acting career from the short, comedy series, Senior Slasher in 2014.

Later, Debut in a TV movie career from Hopefuls as Mckayla.

From 2016 to 2018, she appeared in different TV Series such as Legendary Dudas, Del Playa, The Thundermans, Nicky, Ricky, Dicky & Dawn.

As of 2019, she worked in a Knight Squad as Ciara and Red Rubu as Ruby.

She has also been a part of the different Awards ceremony, such as Nickelodeon’s Halo Awards 2017, Nickelodeon Kids’ Choice Awards 2018, 2019, as a presenter and Host.

Daniella has 860.7 thousand followers on TikTok account with id @daniellaperkins and reached likes in millions.

Daniella becomes TikTok sensation after posting his comic and lip-syncs videos on TikTok.

She collaborated with his friends and more other TikTok stars like Jaden Hossler, Jordan Beckham, Anthony Reeves, and others, to make a video more interesting and wonderful.

Daniella has another TikTok account id @Perkinsissisters and named Perkins Sisters. It has 2.6 k followers and reached likes in millions. She runs this TikTok account collaborating with her sister, Divinity Perkins. Together, they also have Instagram with 131 k followers, and YouTube with 88.6 k Subscribers.

Daniella has a self-titled YouTube channel with around 682 k subscribers and views in millions. She joined the YouTube community on Feb 12, 2017.

Daniella is a social media personality. She is a Vlogger and traveler. So she posted a video about her lifestyle and a combination of different interesting content. She has gained huge fans and followers from her tips on different subjects, tutorials, and her regularity on her YouTube channel. Therefore, every follower loved her work and want to see more videos from her.

Daniella popular uploads such as ‘how to get an hourglass figure in 3 days ft.body’ and ‘TWO TYPES OF PEOPLE ft. Jace Norman’ has over millions of views on it.

Daniella’s net worth is approximately $ 1.5 million US.

The actor and performer average salary is $56 k US.

Daniella has dark brown eyes and black hair. Her height is 5 feet and 1 inch and weight is 48 kg.

Daniella has 908 k followers on Instagram and about 257 posts have already been published on her Instagram wall. She is following the personalities like Tisha Campbell, Michael Gruen, NIKI DEMAR, Josh Richards, and Mathilde.

Daniella has around five hundred followers on Twitter. She joined Twitter in September 2015 and tweeted around 2 hundred tweets.