Danielle Brooks is an American actress and Voice Artist. She is also well known for lending her voice in The angry bird's Movie (2016), Time Out of Mind (2014), and for her Tony Award Nominated 2015 Broadway production of The Color Purple in which she stars as Sofia. 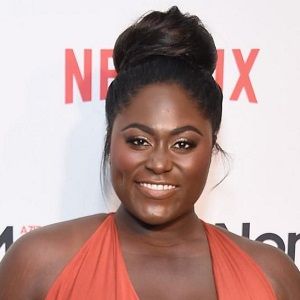 Don't compare your career to anyone else's. It's tough when you're in a business that's competitive. I was having a difficult time with that in college. Now, I'm having to learn to be patient and be where I am.

I think theater and church are so relatable because it's traditional call-and-response in the way that an audience interacts with the actors.

Personally, I don't want to live with limitations. If there comes a time where I am dying to play Juliet or Macbeth, I want to make those avenues for myself.

Danielle Brooks is a single, straight woman. She is presently focused on her career. When the right man comes along the way, we all hope the bold and beautiful actress will be open for a relationship.

The 28-year-old actress is quite private about her personal life. So, her previous boyfriends and relationships are not known.

Who is Danielle Brooks?

Currently, she is known for Season1 of the Television series Peacemaker.

Danielle Brooks was born on September 17, 1989, in Augusta, Georgia, USA. She grew up in Greenville, South California. She is from a Christian family. Her father is a deacon and her mother is a minister.

She began acting at the age of 6 in a nativity play put on by her church.

Danielle’s Ethnicity is African American and nationality is American.

Brooks got her higher education from South Carolina Governor’s School for the Arts and Humanities. Meanwhile, she went to University, The Julliard School.

From there, she graduated in drama in the year 2011. Brooks met and made friends with Samira Wiley. Samira Wiley is also her on-screen best friend in the series Orange Is the New Black.

After her graduation from Juilliard, Brooks was involved in theater productions. She was able to win two roles in a theater: the Shakespeare Theatre Company’s Servant of Two Masters, and Blacken the Bubble.

In 2013, Danielle left theater production after she was cast as Tasha “taystee” Jefferson in the Netflix-produced television series Orange Is the New Black. The scriptwriter first had the intention to feature the character Taystee in only two episodes. Later, they upgraded the character from a recurring cast member to a series regular.

In September 2013, she also acted in a season 3 TV series of HBO girls. She played the first black woman on the show. Her performance as Sofia in the Broadway musical of the year 2015, The Colour Purple gave her much critical acclaim and recognition.

Brooks also featured the character Shanon in the 2015 episode “Indians on TV” of the series Master of None. She also has lent her voice in the pilot episodes of Lasso & Comet.

Danielle has not yet implied her acting skills in movies. However, she has voiced a character in the film Angry Birds. She is to appear in the film I Dream Too Much which is in post-production. Brooks has gained much fame for her roles also in productions like Girls, Master of None.

She has worked hard throughout her life, grabbing every possible opportunity and reached her dreams.

In the year 2013, she won the Breakthrough actress in association with the Young Hollywood Award for her performance in Orange Is the New Black. Two years into her career, she won the Outstanding Performance by an Ensemble in a Comedy Series by Screen Actors Guild Awards for the same role.

She won an Outstanding Featured Actress in a Musical in Outer Critics Circle Award and was honored in Theatre World Award for the same performance. The same year, She also won Outstanding Performance by an Ensemble in a Comedy Series in Screen Actors Guild Awards for Orange is the New Black.

In the year 2017, she won Grammy for her outstanding performance in The Color Purple

Danielle Brooks: Salary and Net Worth

Her salary is not yet officially disclosed. The talented and beautiful actress’s estimated net worth is $ 1 million. This enlists her as the 10 richest celebrities in Hollywood.

Brooks is busy with her career and does not have time for any rumors. Her action and words have not sparked any controversy.

Her height is 64 inches. She has an average body structure. She has beautiful black hair which matches her dark brown eyes perfectly. Her weight, bra, hip, waist, dress, and shoe size are not yet known.

Danielle has a large fan base all over the world. She keeps in touch with her fans through social media. Her Twitter has almost 374.8K followers and her Instagram has around 2.4 million followers. She is an inspiration to thousands of actors aspiring to be in starlight.