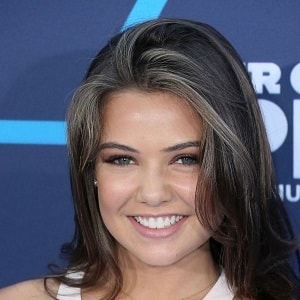 “Love leaves a memory nobody can take away from you.”

What is the relationship of Danielle Campbell?

Danielle Campbell is dating Colin Woodell. Her boyfriend Colin is an American actor.

The couple knew one another since 2014, however, they started dating in October 2019. She was romantically linked with Tyler Posey for 2 months.

Previously, she was in a relationship with Louis Tomlinson in fall 2015. Louis is an English singer-songwriter and a member of the ex-band, One Direction.

Danielle along with her family and with Louis was seen together in an ice cream parlor in Los Angeles. They were an item!

The duo loves to share their pictures on social media. They are happy to present themselves as a couple to the public. She currently lives in Atlanta, Georgia. In January 2017, the reports were that they broke up.

Who is Danielle Campbell?

Danielle Campbell is an American actress and she is famous for her role as Jessica Olson in the 2010 Disney Chanel Original Movie ‘StarStruck’.

She is also well recognized as Simone Daniels in the 2011 Disney film ‘Prom’ and Kayla Powell in the series ‘Tell Me a Story’.

She was born on January 30, 1995, in Hinsdale, Illinois, USA. Her birth name is Danielle Marie Campbell and she is currently 24 years old.

Her mother’s name is Georganne Campbell and her father’s name is John Campbell. She has a younger brother, Johnny and she is very close to him as they are often seen hanging out together.

Danielle was discovered at the age of 10 in a hair salon in Chicago by the makers of Prison Break. She knows how to surf. Danielle is one of the friends of Nathaniel Buzolic. She is also an avid animal lover.

She got enrolled in the Hinsdale Central High School and graduated from there.

She debuted her career as a guest star in the series ‘Prison Break’ in which she portrayed the character, Gracy Hollander, in 4 episodes from 2006 to 2007. Later, she portrayed the role of Darla in ‘The Poker House’ in 2008, Simone Daniels in ‘Prom’ in 2011, Cindy Needleman in ‘Madea’s Witness Protection’ in 2012, etc.

Her recent film roles include Maddy Datner in the film ‘F the prom’ in 2017 and as Allison in ‘You Can Choose Your Family’ in 2018.

Then, she was cast in the series ‘SINs’ as Ellie Reed and as Maddy in the Fine Brothers production ‘F the Prom’ in 2017.

Along with that, she made her appearance in the music video ‘Better With You’ by Jesse McCartney in March 2018.

She has not been awarded and nominated in her profession yet. She is still in the beginning period of her career and we can hope she will make us happy by winning awards and nominations in the future.

How much does Danielle Campbell earn?

She has an estimated net worth of around $500,000 as of 2022, which she earned from her professional career. It is expected to rise as she is still active in her career.

She was rumored to be in a relationship with her co-star Nathaniel Buzolic but neither of them has opened their secret. And, it is yet to be confirmed.

Nathaniel Buzolic is still having dating affair with his French girlfriend or ended the relationship?