Danielle Panabaker is a married woman. She announced in July 2016 that she got engaged to her longtime boyfriend Hayes Robbins in Greece during their vacation. They got married on June 24, 2017.

The couple met via their mutual friends. Her husband, Hayes serves as an attorney at Stone, Meyer, Genow, Smelkinson & Binder LLP in Beverly Hills. 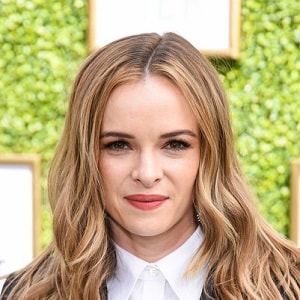 “I think it's important to be kind to the world before it disappears if we don't take care of it.”

Who is Danielle Panabaker?

Danielle Panabaker is an American actress and she is famous for her role in the CBS legal drama series ‘Shark’ from 2006 to 2007. Later, she is noted for her performance as a scream queen, having starred in the psychological thriller ‘Mr. Books’ in 2007.

Danielle was awarded three Young Artist Awards for guest-starring in an episode of the legal drama television series ‘The Guardian’ in 2004, for her ensemble performance in the family comedy film ‘Yours, Mine & Ours’ in 2005 and for her lead role in the TV film Searching for ‘David’s Heart’ in 2005.

Her father was a salesman, hence the family spent time in South Carolina, Pennsylvania. They lived for a short time around Panabaker’s kindergarten year in Orange, Texas. She holds American citizenship and her ethnicity is a mix of English, Irish, German, Scottish, Welsh.

She learned Theatre at a summer camp and discovered her love of acting. Then, she started acting in community theatre at the age of 12 and later auditioned for commercials. Then she went to Naperville, Illinois in 2000 and studied at Crone Middle School and later joined Neuqua Valley High School and participated in the speech team. Danielle graduated from high school at the age of 14. She studied acting from Glendale Community College and earned her associate degree and appeared on the National Dean’s List in 2005.

She made her appearance in television in the part of ‘The Guardian’ as well as in the ‘Malcolm in the Middle’, ‘Law & Order: Special Victims Unit’, ‘Medium’, and ‘Summerland’. She also appeared in the Lifetime television production productions ‘Sex and the Single Mon’ and ‘Mom at Sixteen’.

She also appeared in stage productions with roles in musical theatre in ‘West Side Story’, ‘Pippin’, ‘Once upon a Time’, and ‘Beauty Lou and the Country Beast’.

Danielle starred in the ABC film ‘Searching for David’s Heart’ in 2004 and had a supporting role in the Disney Channel original movie ‘Read It and Weep’ and in the film ‘Mr. Brooks’.

She starred in the CBS television drama ‘Shark’ from 2006 to 2008 where she portrayed the role of Julie Stark and played as Jenna in the ‘Friday the 13th’ remake in 2009. She also starred in the films ‘The Ward’ and ‘The Crazies’.

She portrayed the lead character of Katie Lapp in the Hallmark Movie ‘The Shunning’ in 2011, which was based on the novel by Beverly Lewis. She reprised her role in the 2013 sequel ‘The Confession’ but she dropped out from the sequel.

Danielle starred in the movie ‘Nearlyweds’ in 2013 and joined actors including Philip Baker Hall, Bill Pullman, and Maggie Siff in performing at Cedering Fox’s WordTheatre, where they read aloud contemporary short fiction on May 5, 2013.

She starred in the award-winning science fiction film ‘Time Lapse’ in 2014 and played Caitlin SnowKillerr Frost as the main character in the CW series ‘The Flash’ since October 2014. She made her directorial debut with the eighteenth episode of the show’s fifth season.

She has an estimated net worth of $5 million as of 2022, and her main source of income is her professional career.

There is a rumor that she is pregnant and a source close to the couple confirmed they were expecting a child.