Danielle Pinnock is a well-recognized Jamaican-American actress, content creator, and writer. She is married.

Talking about her relationship details, Danielle Pinnock is happily living a married life with her longtime partner, Jack Wallace. Wallace is a dialect coach for film and television. The couple tied the knot on 10 August 2013.

They wedded in the ER because her mom had a stroke the night before the wedding. However, the hospital allowed them to do the ceremony in the ICU so they shared the vows in the room with about 8-10 people.

Danielle often shares their happy moments on her Instagram. Other than that, Danielle has been secretive about her relationship details. 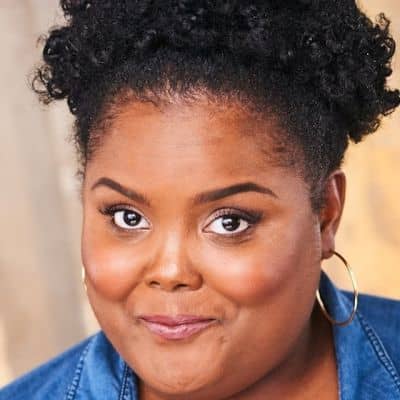 Who is Danielle Pinnock?

Pinnock is widely famed for her role in Get Shorty, Dollface, Young Sheldon, A lady Sketch Show, ThunderCats Roar.

Moreover, she is also known for being the co-creator of the viral online sketch series Hashtag Booked.

Danielle Pinnock was born in the year 1988. Presently, she is 33 years young star. Likewise, her birthplace is Los Angeles, California, the USA.

Not much is known about her father and mother’s details, Danielle has been secretive towards her family details. Moreover, she has not mentioned her sibling’s information in the public yet.

Talking about her nationality, Pinnock holds an American-Jamaican identity whereas her ethnicity is African-American(Jamaican).

Regarding education, the actress earned her BA in Communications and Theatre from Temple University and completed her graduation with First Distinction Honors with an MFA in Acting from the Royal Birmingham Conservatoire in the UK.

Danielle is a well-known writer, actress, and content creator. She was mentored by Anna Deavere Smith and is classically trained with over a decade’s worth of Off-Broadway, regional, and has an international stage repertoire from theatres like the Goodman, Geffen Playhouse, and The Kennedy Center.

Moreover, Pinnock has performed as a recurring star for four seasons on the hit CBS comedy Young Sheldon portraying the role of Ingram. Later, she also featured going toe-to-toe with Ray Romano and Peter Bogdanovich in EPIX’s Get Shorty.

The star has also provided her voice to many recurring animation roles for DreamWorks, Universal, Netflix, and Cartoon Network. Danielle is also the co-creator of the popular online sketch Hashtag Booked. The book has been sold and viewed over 15 million. Hashtag Booked examines a raw slice of the #actorslife with searing specificity and laugh-out-loud improvisation.

Some of her recent and remarkable roles as an actress are Ghosts, Doug Unplugs, Tell It Like a Woman,

A famous star, Pinnock has earned a healthy amount of money from her profession. She lives a lavish lifestyle along with her family.

It is reported that Danielle Pinnock has an estimated net worth of $1 million as of 2022.

Danielle has never been part of any controversial matter or rumors till now. The star has been preoccupied with her professional and private life.

It seems that Pinnock prefers enjoying her personal life and does not want to merge it with her professional life.

A known personality, Danielle has beautiful looks and an admirable personality. She stands at a height of 5feet 5inches. Also, she has a balanced body weight of 95 kg.

Furthermore, Pinnock has dark brown eyes whereas her hair is black.

Regarding her social media presence, Danielle Pinnock is an active personality on social media. Danielle has more than 33.8k followers on her official Instagram account @bodycourage.

She is also active on Twitter with around 12.2k followers.