Danny Ainge is an American basketball executive, former basketball and baseball player who played for Boston Celtics, Toronto Blue Jays, and many more. He is married and a father of six kids.

Danny Ainge is a married person. He has been married to his longtime girlfriend Michelle Toolson on 30 March 1979. The couple is blessed with six children- sons Austin, Crew, Cooper, Tanner Ainge and daughters Ashley, Taylor Ainge.

Their son, Austin Ainge is the director of player personnel for the Boston Celtics, having played basketball at BYU. The couple seems happy with each other and there is no sign of divorce between the couple. 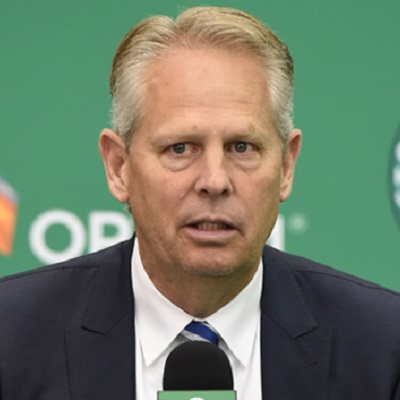 With the NBA scheduling, a lot of times it puts the onus on teams traveling. You play Utah one night and a team like Phoenix is resting and waiting for you the next night. That's tough. So you run into some circumstances like that more, it seems, on the road than you do at home.

I'm always talking about Ryan and how we haven't been able to give him time. Well, this is our chance to get a good look at him.

Who is Danny Ainge?

Danny Ainge is an American basketball executive and former basketball and baseball player who played for Boston Celtics, Toronto Blue Jays, and many more. Currently, he is working as the general manager and President of Basketball Operations for the Boston Celtics.

He was born on March 17, 1959, in Eugene, Oregon, USA. His birth name is Daniel Ray Ainge. He was born to his mother Don Ainge Sr. and his father Kay Ainge. Also, he has three siblings- brothers Doug Ainge Jr., David Ainge, and sister Laurie Ainge.

Danny holds American citizenship but his ethnicity is unknown.

He attended North Eugene High School and then joined Brigham Young University (BYU) from 1977 to 1981. He played basketball, football, and baseball in high school and basketball in university.

He was selected by Toronto Blue Jays in baseball’s 1977 amateur draft of the Major League Baseball (MBL). He had the hit of .220, 2 home runs, and 146 hits in 211 games in his college baseball career. Later, he decided to pursue his career in basketball.

Fortunately, he was chosen by the Boston Celtics in the 1981 NBA draft. While on the team, he played against Houston Rockets, and Atlanta Hawks, and he was traded to Sacramento Kings in 1989 and to Portland Trail Blazers in 1990.

Then, Danny Ainge has become a free agent after the 1991–92 season and then signed a contract with Phoenix Suns on July 1, 1992, which was his first day as a free agent. But, he retired from the 1994–95 season and he was inducted into the Oregon Sports Hall of Fame in 1999.

After his retirement, he worked as head coach of the Phoenix Suns in 1996,  Executive Director of Basketball Operations for Boston Celtics in 2003, and also as a  commentator for the NBA on TNT. Moreover, he became the general manager of the Boston Celtics in April 2017.

As of 2022, he has an estimated net worth of around $10 million and he has earned that sum of money from his professional career. This player has earned not only fame but also a huge fortune from his playing career.

There is a rumor that a rift between Danny Ainge and Kyrie Irving may be the reason that Irving is unlikely to return to the Boston Celtics. But, the rumor is yet to be proven.

Danny Ainge has a height of 6 ft. 4 inches and weighs 79 kg. Also, he has blue eyes and blonde hair. His shoe size, dress size, etc. are not available.