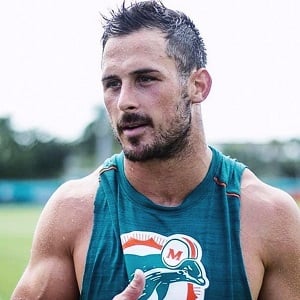 As much as it hurts to work out after a game, it helps that much more.

Danny Amendola was previously in a relationship with model Talor Reazin. They were together in 2013. From 2015 to 2016, he dated TV host and presenter, Kay Adams.

Presently, Amendola is in a relationship with model Olivia Culpo. The pair made their relationship public in February 2016. It was reported in March 2018 that they had split, however, they were together again by March 2018.

Who is Danny Amendola?

Danny Amendola is an American football wide receiver for the Miami Dolphins of NFL. Previously, he played college football at Texas Tech. Additionally, from 2013 to 2017, he played with the New England Patriots.

Amendola was born as Daniel James Amendola in The Woodlands, Texas on November 2, 1985. He was born to parents Willie and Rose Amendola. In addition, he became interested in the world of football since his childhood years. He is of American nationality. Furthermore, he belongs to a mixed ethnic background of Italian and Irish.

Amendola initially played football under coach Weldon Willig. Additionally, he finished his senior season with 1,045 receiving yards. He finished his college career at Texas Tech and had 204 receptions for 2,246 yards and 15 touchdowns. Coming to his professional career, Amendola signed with the Dallas Cowboys on April 27, 2008, as an undrafted free agent. On January 6, 2009, he was signed to the practice squad of the Philadelphia Eagles. His first NFL regular season action was in 2009 for the St. Louis Rams in which he caught 43 passes for 326 yards. In addition, he finished the 2012 season with 804 total yards. He had 666 yards on 63 receptions and 122 yards on 17 punt returns.

Amendola signed with New England Patriots on March 13, 2013. He finished the 2013 season, with 54 catches for 633 yards. Additionally, he finished the 2016 season with 23 receptions on 29 targets for 243 yards and four touchdowns. More recently, in the 2017 season, Amendola went to Super Bowl LII. He signed a two-year contract with the Miami Dolphins on March 15, 2018.

Amendola currently has a base salary of $2,950,000. Additionally, he has an estimated net worth of around $ 13 million at present.

Amendola was seen together with local CBS sports journalist Bianca Peters recently. There were several rumors which suggested that they might be dating however, it has been revealed that they are not officially dating. Amendola became part of a controversy in 2015 after he was fined $23,152 by the NFL for an illegal block on Jamell Fleming.

Talking about his body measurement, Amendola has a height of 5 feet 11 inches (1.8 m). Additionally, he weighs around 77 kg or 169.5 lbs. Furthermore, his hair color and eye color is dark brown.

Also know more about the early life, career, net worth, relationships, and controversies of other other football players like Ed Marinaro, Peyton Manning, Julius Peppers, Adrian Peterson, and Terry Bradshaw.