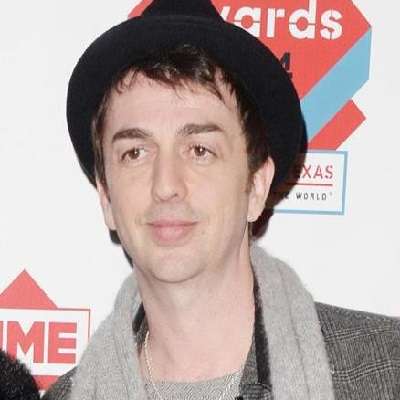 Danny Goffey is happily married to Pearl Lowe. His wife, Lowe is a Fashion and Textiles Designer.

The couple has been together with each other since 1995. After thirteen years, the couple got married to each other on 4th December 2008. The wedding took place in the chapel of Babington House.

Together, the couple is blessed with three children including two sons; Alfie Lennon and Frankie, and a daughter, Betty. The couple went through a miscarriage in May 2010. They announced the news on 19th May 2010.

Who is Danny Goffey?

British Danny Goffey is a musician, singer, and drummer. Goffey is renowned as the drummer and vocalist of the British Rock Band, Supergrass.

Last, in 2020, he launched the album, Turn Ons along with the cover band, The Hotrats.

Danny Goffey was born on 7th February 1974 in Eton, Buckinghamshire. He is of British-Irish ethnicity.

His father, Chris Goffey is is a journalist and TV Personality. Chris is renowned for presenting the BBC’s TV series, Top Gear. His mother’s name is Linda Nolan.

He has a brother named Nick Goffey. Nick is a professional music director.

Since his childhood, he was highly attached to music. At a very young age, he formed his first band, The Jubbly Spufflwubs. By the age of 10, he had already written many songs including My Wife Shut My Gonads In the Door.

Moving to his academics, he completed his High School education at Wheatley Park School. Later, he joined The Henley College.

He started his professional journey as a music artist his in school days. At the time, he performed in The Jennifers along with his brother, Nick, Andy Davies, and Gaz Coombes. In the performance, he was active as a drummer.

Moving forward, they started playing gigs in various venues in Oxfordshire. In 1993, he formed the band, Supergrass along with the lead singer and guitarist, Gaz Coombes. The following year, they launched its debut single, Caught by the Fuzz. The single peaked at the 43rd position in Official Charts Company.

In 1995, the band released its debut studio album, I Should Coo under the recording label, Parlophone which consists of 13 tracks. The album received Ivor Novello Award for the Best Contemporary Song, Alright.

Apart from the band, he is also popular for his solo projects. For his solo project, he uses the pseudonym name, Van Goffey. In 2004, he released the single, Do They Know It’s Christmas for the charity. The single peaked at 1st position on UK singles Chart.

Following the album, he released albums including In It For The Money, Supergrass, and Road to Rouen along with his band, Supergrass. In 2010, the band got separated from each other to purpose their solo music career.

After the separation, he launched his solo albums Take Your Jacket Off & Get into It and Schtick. Besides singing, he has made his appearance in the reality TV series, Celebrity Masterchef on BBC One.

After nine years, Supergrass got reunited once more in 2019.

He has brown eyes with brunette hair. He has decent height and average weight. However, details on his body stats are not available.

He also has a self-titled YouTube channel with 663 subscribers with 153k views.