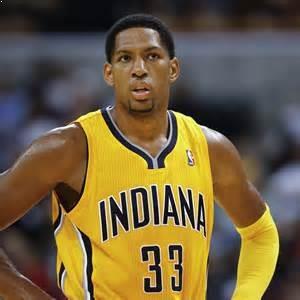 Awesome, really incredible. It’s hard to put into words to see yourself in this little person. My wife and I love it. My life is now devoted to my children. It has made me more responsible.

Reflecting on the personal life of Danny Granger, he is married to Dionna Kann Granger. The couple got into a married relationship in 2009 after being in a romantic relationship for several years.

They have been blessed with three children, Jaxon and Jade (twins) and a son (the name is unknown).

Who is Danny Granger?

Tall and handsome Danny Granger is a well-known American professional basketball player. He is popular for his small forward and power forwards positions. He is currently a free agent.

Born as Danny Granger Jr. in New Orleans, Louisiana on 20 April 1983. He is of African American ethnicity and has American nationality.

His mother’s name is Janice Granger and father’s name is Danny Granger Sr. He was raised in a religious household of Jehovah’s Witnesses. He has a younger brother, Scotty Granger who is a musical artist and a songwriter and a sister named Jamie Granger.

He studied at Grace King High School in Metairie, Louisiana where he was the nominee of McDonald’s All-American nominee. He attended Bradley University but transferred to the University of New Mexico where he graduated in civil engineering.

Danny Granger started playing basketball professionally after being selected by Indiana Pacers in the 2005 NBA draft. He is active on the sports field from 2005 and he is still active in playing. His career took on the successful path with his outstanding performance in the games.

On 31 October 2008, he signed a five-year contract extension with the pacers which paid him $9,930,500 and escalates ten percent each year. He was announced as an All-Star reserve for the Eastern Conference on 29 January 2009. In 2010, he was selected for the United States national team to play in  FIBA World Championship and won a gold medal beating host country Turkey. On 20 February 2014, Danny joined the Philadelphia 76ers but left the team just after six days.

On 28 February 2014, he signed with the Los Angeles Clippers but soon left the team after playing for five months. Then on 14 July 2014, Danny signed with Miami Heat but soon got traded to Phoenix Suns on 19 February 2015. Due to his knee injuries, he missed most of the games. He signed a one-year extension contract with the Suns worth $2.17 million but traded to Detroit Pistons on 9 July 2015. After three months he left the team and became a free agent.

His success in career path has paid him well financially making his estimated net worth to be $20 million.

Being sent to the Phoenix club as part of the Goran Dragic trade, Danny Granger doesn’t fill a need for the Phoenix Suns as well as doesn’t fulfill their desire to stockpile young assets. Therefore, the two parties have begun thinking maybe a termination might be needed.

Danny has a height of 6 feet 8 inches. His body weighs 103kg. Danny has black hair and dark brown eyes.