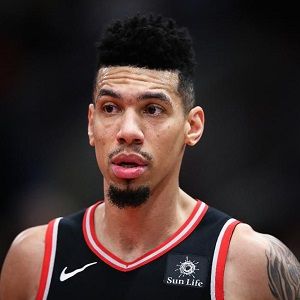 Can’t believe we celebrated our 4-year anniversary yesterday!! This past year has been a crazy year filled with a lot of ups and a few downs, but we always make it through whatever comes our way! I could not have imagined a more AMAZING way to spend our last day of year 4 than celebrating you becoming an NBA World Champion once again!! I love you @greenranger14, and I will always be here supporting you through it all!

The American basketball player Danny Green is not married yet. But he is in a four-year-long relationship with his girlfriend Blair Bashen. Similarly, they share each other’s picture on Instagram. There is no news of the break up of the couple.

They love spending time with each other and are together. They recently celebrated their four years anniversary.

Who is Danny Green?

Daniel Richard Green Jr. is an American professional basketball player known as Danny Green. He plays for the Toronto Raptors of the National Basketball Association (NBA).  Similarly, he won an NBA championship with the San Antonio Spurs and became the third player from UNC to win an NCAA championship.

He was born on 22nd June 1987 in North Babylon, New York. Similarly, he is the son of Danny Green Sr. and Rene’ Darrell. He has two brothers Devonte Green and Rashad Green. His family is a sports-loving and athletic one as his siblings and cousins have also been able to play in college.

Likewise, he belongs to American nationality and his ethnicity is Afro-American.

Talking about his education, he attended North Babylon High School where he completed his freshman year. He then transferred to a private school St. Mary’s High School, in Manhasset, New York.

In college, he played basketball for the University of North Carolina (UNC), where he played in more games (145) and had more wins (123) than any Tar Heel before him. Similarly, Danny is the only player in the history of the Atlantic Coast Conference (ACC) with at least 1,000 points, 500 rebounds, 250 assists, 150 three-pointers, 150 blocks, and 150 steals.

Similarly, he was drafted by the Cleveland Cavaliers with the 46th overall pick in the 2009 NBA draft. During the 2013 NBA Finals, he set an NBA record for most three-point field goals made in a Finals series. Known for his perimeter defense and three-point shooting, he has been a key contributor on both ends on the floor throughout his NBA career, having been selected to his first NBA All-Defensive Second Team in the 2016–17 season.

Likewise, Danny Green enjoyed a breakout year in the 2011-12 season as the Spurs recalled him and made him their starting shooting guard. He was well known for dancing to the song “Jump Around” to pump up the crowd before most of the University of North Carolina home games.

Further, he helped the Raptors finish the season with 58 wins and shot a career high from the 3 at 45.5%. Similarly, Toronto went on to defeat the Magic, Philadelphia 76ers, and Milwaukee Bucks in the playoffs to advance to the 2019 NBA Finals where they will play the Golden State Warriors.

Danny Green has a height of 6 feet 5 inches and his weight is almost 98 kg. Similarly, his hair color is black and he has black color eyes as well.