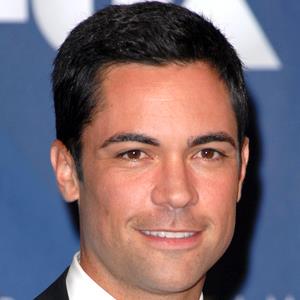 I have my great grandmother's recipe for black beans, all the way from Cuba, and I know how to make those. I'm actually pretty good at it now. But my first time, the beans actually exploded in the pot, so I had black beans just dripping from the ceiling - which is actually a dream come true for most Cubans. It was a nightmare to clean

I'm blessed to come from a family with five brothers. We're all physical and athletic and like to work out, like to be outside, like to throw the ball around. We spent our entire childhoods on some kind of corner or in a field. We still do a Turkey Bowl every Thanksgiving. It gets competitive, man. Bloody

Choose wisely, then eat in moderation. When I know I'm going to Mom's for dinner, I throw an extra 20 minutes on the cardio machine so I can be ready to eat.

Danny Pino is a married man for a long time. He is married to his longtime girlfriend Lilly Pino Bernal. This couple has dated each other for several years before getting married.

After years of affair, they got married on 15 February 2002. They have been married for 15 years now and their relationship is still very strong, the couple together has two sons named Luca Daniel, born on February 15, 2006, and Julian Franco, born on June 5, 2007. Danny is living a happy life with his wife and children.

Who is Danny Pino?

Danny Pino is a famous American actor. He is popular for his role as Detective Scotty Valens in the CBS series Cold Case from 2003 to 2010. He is also known for playing NYPD Detective Nick Amaro in the long-running NBC legal drama Law & Order: Special Victims Unit from 2011 to 2015.


Danny Pino was born as Daniel Gonzalo Pino on 15 April 1974, Miami, Florida, USA. His nationality is American and he is of Cuban ethnicity. There is no information about his mother, father, and siblings.

He also attended New York University’s Graduate Acting Program at the Tisch School of the Arts and graduated in 2000.

Danny has been an active member in the industry since 2001. He made his acting debut appearing as a guest in the TV film Men, Women & Dogs in 2001. His early career works include Point of Origin, Lucy, The Shield, and Between.

He got his first big break in the TVs series Cold Case (2003-2010), in which he played the role of Detective Scotty Valens. He was nominated for the “Imagen Award for Best Supporting Actor—Television” for his performance in Cold Case.

In 2011, Pino joined the cast of Law & Order: Special Victims Unit for its thirteenth season along with Chase actress Kelli Giddish. He played the role of Detective Nick Amaro in the series for which he was nominated for the “ALMA Award-Outstanding Actor in a Drama Television Series” in 2012, and in 2016, he played the lead character Luke Healy in BrainDead.

He has won the Imagen Award- for Best Actor—Television (2010) for his performance in Cold Case. In 2015, Danny won the “Imagen Award-Best Supporting TV Actor” for his role in Law & Order: Special Victims Unit.

Danny Pino: Salary and Net Worth

He has been a successful actor in his career and he has a net worth of 3 million dollars but his salary is not revealed yet.

Danny Pino has a height of 6 feet. His body weighs 77 kg. He has black hair. Also, his eye color is dark brown too. His shoe size is 11(US).