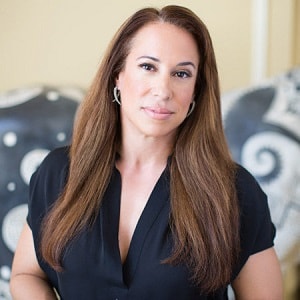 Dany Garcia was married to her high school sweetheart Dwayne Johnson in 1997. After dating for several years, the couple married and welcomed their first child, Simone Alexandra Johnson, in 2001.

The couple started facing problems as life was going on and they finally called off their relationship in 2008.

Later, she married Dave Rienzi on 29 March 2014. The couple is spending quality of time together and there is no symptom of divorce.

Who is Dany Garcia?

Dany Garcia is a producer and bodybuilder from America. She is famous as a producer for her documentaries like ‘Snitch’, ‘P.O.V.’, and Racing Dreams’.

She is also the president and founder of the Media Management Company called ‘The Garcia Companies’.

She was born on November 29, 1968, in Miami, Florida, USA. Her zodiac sign is Scorpio and details about her parents are not disclosed.

She is currently 51 years old. Dany has got a sibling, Hiram Garcia and she grew up with her. She holds American citizenship but her ethnicity is unknown.

Dany graduated from the University of Miami. She continues as an athlete in college. She received her graduation in international marketing and finance in 1992.

Dany Garcia first made her appearance on television series. Later, she produced documents like ‘Snitch’, ‘P.O.V.’, and ‘Racing Dreams’.

Currently, she is working as the founder and the president of ‘The Garcia Companies’ in which the company deals with the management of Media. Previously, she was the founder o the might JDM Partners LLC and served as executive officer. She is also the founder of the organization called ‘The Beacon Experience’.

Dany also expanded her platform to include lifestyle and digital with the launch of a YouTube Channel ‘The Rock‘.

She is the only female American business executive who is a professional bodybuilder. She has got much encouragement from her present husband, Dave Rienzi.

Dany became 7th out of 42 women at her first national competition. Dany earned her pro-card with the International Federation of Bodybuilding and Fitness (IFBB) in 2014.

She is still continuing bodybuilding and she has vowed that she would not ignore her other interests and she is really doing well in competitions with business meetings in Hollywood.

She has an estimated net worth of around $70 million and she earned that sum of money from her professional career and from various sectors such as Cava Mediterranean Grill Restaurants and various other business plans.

She loves to be away from social media and she has not been involved in any rumors and controversies in her private and in her professional career.

Dany Garcia has a height of 5 ft. 8 inches and she weighs 66 kg. She has got brown eyes and dark brown hair.