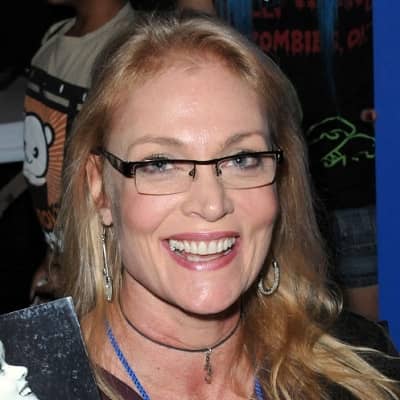 Daphne Ashbrook’s relationship is single as of 2020.

In the year 1987, she was in a relationship with an American actor, Lorenzo Lamas. The couple had a daughter named Paton Lee Ashbrook, who was born on September 6, 1988. Paton is now an actress.

But, a year later this couple got divorced.

Daphne was also dating David Vito Gregoli, who is a musician.

Who is Daphne Ashbrook?

Daphne is an actress and writer. She gained popularity after playing the titular character of Ensign Melora Pazlar in an episode of the science fiction television series Star Trek: Deep Space Nine (1993).

Moreover, the actress has published her autobiography named Dead Woman Laughing in 2012.

She was born on January 30, 1963, in Long Beach, California, and was raised in San Diego, California. Her birth name is Daphne Lee Ashbrook.

Talking about her nationality its, American and she belongs to Anglo-Saxon ethnicity.

Being grown in a family engaged in acting, she started her acting from her young age. She was 6 yrs old when she played as Susanna (Shakespeare’s daughter) in A Cry of Players. For it, she also won an American College Theatre Festival Award.

She completed her schooling from the local school in her home. After that, she has her education from Grossmont College.

Daphne Ashbrook gained recognition after playing the titular character of Ensign Melora Pazlar in an episode of the science fiction television series Star Trek: Deep Space Nine in the year 1993. Likely, she is also known for appearing in the TV movie Doctor Who (1996) as Dr. Grace Holloway.

Her other TV and film work includes recurring roles on The O.C., JAG, Falcon Crest, Hooperman, The Lodger, and Supreme Courtships (2007). Further, she has starred in many Mini-Series including Rock Hudson as Phyllis Gates, Intruders, and The Love Letter, starring opposite Campbell Scott.

Daphne is an accomplished singer and released her 1st music CD titled Grace Notes on Dharmapala Records on Dec. 10, 2010.

It comprises mostly the cover tunes in the “Americana” style along with elements of pop and jazz. She also featured her daughter on the vocals. Further, it was chosen for the 2010 Grammy nomination ballot.

In the year 2012, she published her autobiography named Dead Woman Laughing. Following year, she toured with the book too.

She won a Best Supporting Actress Award at the Method Fest Independent Film Festival for her performance in the film Dumbarton Bridge. Moreover, she also received the Dramalogue Best Actress award for her works in Hearts.

Further, Daphne has also earned a nomination as Best Supporting Actress Ovation Award for her role as Rosalie in Landscape of the Body.

She has amassed a good amount of money from her career. Her net worth is around $10 million.

There are no rumors about this actress up to now. Similarly, she has not been a part of controversies.

She has beautiful gray eyes. She has natural blonde colored hair but prefers to dye it in different shades.

Daphne is active on Twitter with around 6K followers and her Facebook page also holds around 3K following.