Daphne is now living her single life. She resides in London and Manhattan with her three children as of now.

However, the two divorced in 1999 but haven’t revealed their reasons behind it.

Daphne was romantically involved with Bernard-Henri Lévy, French TV philosopher for a couple of years.

Similarly, she has once mentioned Derek Blasberg as “He is obviously the love of my life” in the February 2011 issue of Harper’s Bazaar. 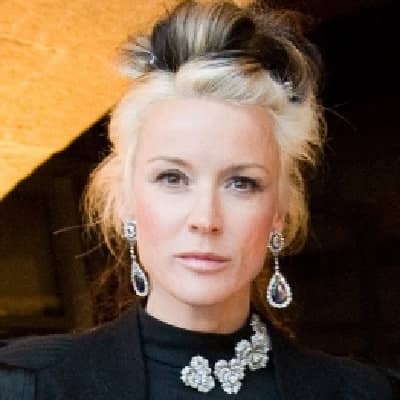 Fragrance takes you on a journey of time. You can walk down the street and pass someone and get taken back 20 years. It's very Proustian that way

I spend a lot of time upside down. It increases the blood flow to the brain, so it really helps your creativity

I practice stoic philosophy. As a human being, you may have emotions, but these don't need to affect your soul. The two are not one.

Who is Daphne Guinness?

Daphne Guinness is an English actress, producer, socialite, and fashion designer. She is also born as a direct relative and descendant of a renowned 18th-century Irish brewer named Arthur Guinness.

Her father is Jonathan Guinness, 3rd Baron Moyne is the eldest son of Diana Mitford and Bryan Guinness. Likewise, her mother’s name is Suzanne Lisney who died in 2005 from lung cancer.

Daphne was raised in the country houses which were owned by her family in England and Ireland and holidaying in Spain every summer.

She is of both British and Irish nationality. Similarly, she is of mixed (English, Irish, Scottish, small amount of French) descent.

Daphne has been designing fashion, jewelry, and perfume since 1994. She first worked with Isabella Blow and later also with NARS, MAC, Akris, Gareth Pugh, and many others.

Guinness has been on the International Best Dressed List since 1994. She launched her own clothing line, called Daphne. It was opened along with the collaboration with Dover Street Market in 2007.

Likely she was named in Tatler’s top 10 best-dressed list in 2010. And then in 2011, she created a make-up line for MAC cosmetics. The same year, she also gets to featured on the cover of Zoo Magazine.

Daphne has also been into producing and has produced, edited three short films. In the year 2011, Guinness starred in Joe Lally’s film, The Murder of Jean Seberg.  She starred and also produced in The Legend of Lady White Snake.

In 2012, Daphne appeared in a short sci-fi fiction Shakki. The next year she released a music video entitled Fatal Flaw. David Barron has directed a documentary film called Daphne Guinness, The Last Leveller in 2014. It includes her musical work and personal musical tastes.

Moreover, Daphne has also been part of various charity works.

Daphne has amassed a net worth of around $100 million. She has her own clothing line, fashion shop, and also has been earning from her movies & videos.

The Guinness family is still the 23rd among the rich list and is and valued at £600 million.

Daphne has just launched her new perfume “Daphne Eau de Parfum”. It was produced with the cooperation of perfumer Antoine Lie and with the house of Comme des Garcons.

After the divorce from her formal partner, Spyros Niarchos Daphne was rumored to have received a £20 million settlement from her divorce. However, the exact detail is not known.

Daphne has an average height of  5 ft and 8 inches and weighs around 87 kg.

Even in her 50s, she looks beautiful with her brown and platinum blonde hair and brown-colored eyes.