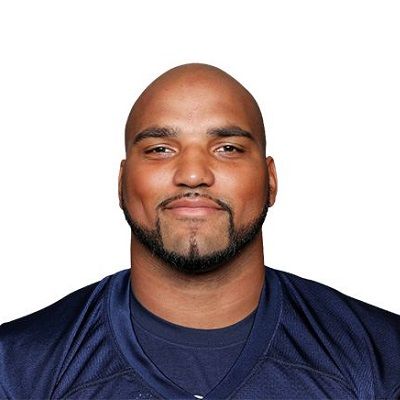 DaQuan Jones is a married man. His wife’s name is Alexis Jones.

As of now, they have not shared any details about their wedding and their love life. They enjoy their private life. However, Alexis shared a picture of their wedding on their anniversary 23rd of March

The couple is blessed with a daughter, Mya Rose. Recently, he shared pictures of their first family vacation.

Who is DaQuan Jones?

American DaQuan Jones is a professional football player. He is renowned for his defensive alignment position as a middle guard.

Currently, he is playing for Tennessee Titans in NFL.

DaQuan Jones was born on the 27th of December 1991 in Johnson City, New York. His birth name is DaQuan Steven Jones.

His father, Steve Jones, and mother, Vaile Newborn are of British-Welsh ethnicity. Steve is an executive chef at Cornell University who raised him as a single father.

As per online sources, Vaile was arrested for attempting the burglary. At the time, she was imprisoned for three years. Also, she struggled with the addiction too.

He is the second among his three brothers. That includes his elder brother, Devon, and younger brothers, Dashaun and Dajon.

He completed his higher education from Johnson City Senior High School in his hometown. During High School, he used to play football and basketball.

After graduation, he joined Penn State for his college. At the college, he represented the college’s football team. In 2013, he graduated from college with a major in criminal justice. The same year, he also worked as an intern for the Township Police Department.

On the 28th of June 2009, DaQuan Jones joined Penn State. Initially, the coach of the team, Mike McQueary selected him to play as an offensive guard. However, his growing defensive skills turned him to play as a middle guard.

As a freshman, he could not play initial the four games in the redshirt season. However, his practice and potential made him play in the field of Big Ten-opener. Moving forwards, in his sophomore year, he played for the 13 games with recording eight tackles.

In the junior year, he ended his junior year, with the record of 22 tackles, with two stops for losses of six yards. Later, in the senior year, he had his career-high 56 tackles including 33 solos.

Rated as the one in the defensive tackle, he was picked by Tennessee Titans at the 2014 NFL Draft. In the rookie year, he played seven games and posted his first sack against Indianapolis.

Later, in the 2016 season finale, he had his first touchdown making the Titans win the game with 24-17 scores.

In 2018, he started 16 games and ended the season with 39 tackles making it his second-highest in his career. The same year, he extended his contract with Titans for three years worth $21 million.

Through his football career, he has made a net worth of $12 million. His basic salary is in the range of $7 million without including the signing of $1.3 million and Cap Hits of $8.3 million.

DaQuan Jones is a black-eyed and has a clean shaved head. His height is 6 feet 3 inches and weighs around 146 kg.

Till the date, he has not been through any kind of controversy that created a buzz in the media. Similarly, there are no rumors related to him.