Darcey Silva is a famous American reality star, producer, and businesswoman. She is dating a guy named Georgi Rusev.

Darcey Silva is currently in a relationship. She is dating a guy named Georgi Rusev.

Previously, she was married to Frank Bollock. The exact date of their marriage is not available. The couple was blessed with two daughters named Aniko and Aspen. The pair could not hold the relationship and ended with separation.

After that, she dated a Durch entrepreneur called Jesse Meester. They came into the limelight after they appeared in the reality show called 90 Day Fiance: Before the 90 Days in 2017. Unfortunately, they had an ugly fight and got separated. The reason behind their separation was because of Darcey’s bad intention.

Later, she dated her British boyfriend named Tom Brooks. They were in an online relationship for almost four years before they actually met. However, there were several rumors and controversies regarding their engagement but Tom revealed that it was only for public attention.

As of now, Darcey has removed all the traces of Ton Brooks on her social media and has expressed her desire to find her own soulmate. 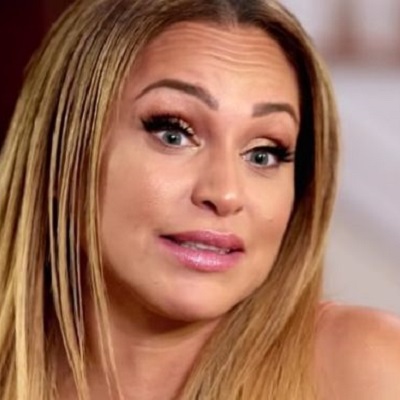 Who is Darcey Silva?

Darcey Silva is a famous American reality star, producer, and businesswoman. She is famous for her performance on the 90 Day Fiance: Before the 90 Days.

She was born on 23rd September 1974, in Middletown, Connecticut, the United States of America. Her birth sign is Libra.

Darcey has not disclosed the names of her parents. Also, she has a twin sister, Stacey Silva.

Darcey holds American citizenship and her ethnicity is Caucasian.

At the beginning of her career, Darcey Silva partnered with her sister Stacey on their fashion brand House of Eleven which has gained some buzz around the United States and is still growing.

After that, both sisters made music together, and also, their clothing line has designed fashion wear for some of the biggest names in the industry like Jessica Alba, Demi Lovato, Nicki Minaj, and so on.

She has made her appearance in the film named ‘White T’ in the year 2013. However, it did not take very long for this determined lady to find fame and attention.

She appeared in a role on the TLC reality series, 90 Day Fiance: Before the 90 Days which helped her rise to the scene and find a decent fan base.

Moreover, she made her appearance in ’90 Day Fiance’ alongside the famous star, Loren Brovarnik. Further, she was a cast member alongside her former boyfriend, Jesse Meester.

Their on-screen chemistry was loved by many of their fans and well-wisher then. Moreover, she was also famous for the movie ‘Who RU Wearing?’.

She has an estimated net worth of around $1 million as of 2022 and she has earned that sum of money from her professional career. Also, she earns around $1k per episode.

In addition, she adds some portion of her net worth from endorsements and brand promotion.

There was a rumor that she was engaged with Tom Brooks as Tom uploaded a photo of Darcey’s hand wearing a diamond engagement ring.

But, later, Tom deleted the post, sparking it was all for publicity.

Darcey Silva has a height of 5 ft. 7 inches and weighs 70 kg. Also, Darcey has grey eyes and blonde hair. In addition, her body measurement is 40-33-38 inches.

To know more about Lexi Rivera, Charles Baker, and Elizabeth Anweis, please click on the link.