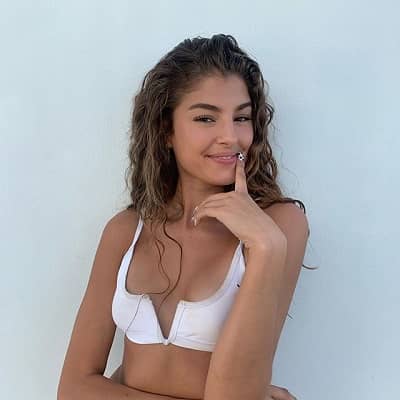 Darianka Sanchez is in a relationship with social media star Austin Nick. They began dating in October 2020.

She and her boyfriend are often seen sharing pictures together on social sites.

Darianka Sanchez is a Tico model, and social media influencer. She is best known for her posts on Instagram, and TikTok.

She is also popular as a participant of NEXT Models Worldwide.

This model was born on 22 January 2002, in Heredia, Costa Rica. She hasn’t shared information about her father, mother as she likes to keep her personal life far from the media.

As per academics, she graduated high school in Florida. Darianka has a younger sister Isabella. She belongs to Hispanic descent.

Sanchez is popular on social media and has become an internet sensation. Earlier, during her high school, she used to work as a model and cheerleader.

Currently, she is signed to the modeling agency NEXT Management and ‘Evolve Models’.

Darianka began using Instagram in 2018. She posts trendy and fashionable outfits and modeling photos on her account.

She has garnered over 743 K followers on Instagram. On her self titled account, Sanchez is following other web stars like Thomas Wesley and the US President Joe Biden.

She is also active on TikTok. She has amassed over 734 K followers and around 11 million likes on her account. Darianka is a trending girl on TikTok with an account name ‘whotfisdarianka‘.

She posts lip-sync, acting, duet, and dance videos on her account. Sanchez also posts collaboration videos with other TikTokers like @lilhuddy and @iamoliviaponton.

The maximum likes on her single video in TikTok is over 8.5 million.

Darianka Sanchez: Salary and Net Worth

Meanwhile, according to some sources, this model has an estimated net worth of $100 thousand.

There was a rumor that TikTok star Nick Austin was dating Darianka. Later, the rumor was confirmed true by Darianka through her Facebook account.

There were also rumors that Darianka hacked Mackenzie Ziegler’s iCloud account and used to bully her. As there is no proof of this rumor, we can’t confirm if the rumor was true or not.

This web star is 5 feet 5 inches tall and weighs 45 kg. Similarly, she has brown hair and hazel eyes. Her body measurement is 30-23-35 inches.

Similarly, she has around 734 K followers on TikTok.

You may also read Alana Clements, Nick Bencivengo, and PaintingRainbows.