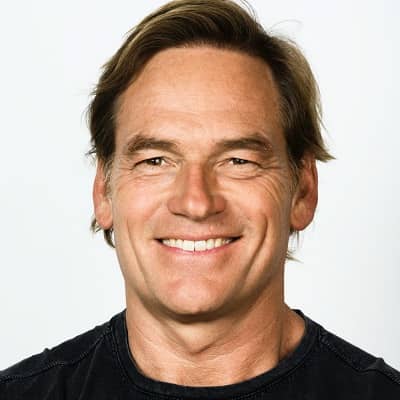 If the things we eat have been processed—manipulated, broken apart, adulterated, with most of the fiber (and nutrients) thrown away—then we end up consuming something that’s food, technically speaking, but lacks many of the health benefits that eating is supposed to bring us. We get calories—which we need to survive, of course—but little else. None of the nutrition. As Dr. Fuhrman puts it, we end up mechanically full but nutritionally starved. If we do that often enough, we will absolutely harm ourselves at the cellular level. Over time, that may bring about some chronic condition.

We make up 5 percent of the world’s population, and we take 80 percent of all prescription painkillers.

Rather than sending us to the pharmacy with prescriptions, our physicians should send us to the farmers’ market

Darin Olien is currently single and is not dating anyone.

Previously, he was married. Darin Olien met his ex-wife, American actress Eliza Coupe in 2014 and married in December of the same year in New Zealand. The couple revealed their marriage in public via their Instagram handle.

However, their 4 years long marriage did not go further and they divorced in 2018. They did not have any children with each other.

Who is Darin Olien?

Darin Olien is an accomplished American author, podcast host, producer, TV host, and Businessperson. Olien is popular as the producer of the documentary Netflix series ‘Down to Earth with Zac Efron’.

In addition, Darin is the co-founder of Shakeology and Barùkas.

He was raised along with two half-siblings Nathan Olien and Jenna Olien. However, he has not much talked about his family and siblings. His father passed away due to alcohol-related problems. Darien has posted many photos of his mother on his Social media platforms.

He is of American nationality but his ethnicity is unknown. His birth sign is Scorpio. Olien owns a German Shephard named Chaga, also he calls King Chaga.

Darin Olien began his career as a nutrition director at Totimed where he worked for four years. Later, he created his own company Darin’s Naturals, LLC. Olien is a wellness expert and promotes superfoods.

On June 10, 2020, he co-starred and produced the Netflix document series ‘Down to Earth with Zac Efron’. Darin produced and appeared in the TV series called Younga. Darin also hosts his own podcast, ‘The Darin Olien Show’.

Likewise, he is also an author. In 2017, he published the book ‘SuperLife: The 5 Simple Fixes That Will Make You Healthy, Fit and Eternally Awesome’. The book provides various knowledge that is related to body health and sickness.

Darin Olien is the co-founder of Shakeology working together with advocate Isabelle Daikeler. In Fact, Shakeology is a nutrient-dense superfood protein shake that’s formulated with globally harvested ingredients that supply phytonutrients, antioxidants, enzymes, prebiotics and probiotics, fiber, adaptogens, vitamins, and minerals. He has introduced Barukas.

There are no rumors or controversies about him. This wellness expert is focused on his career rather than stuck in any sort of controversy that hampers his profession.

Click on the link below to get info about Eliza Coupe, Cara Santa Maria, and Siri Pinter !!