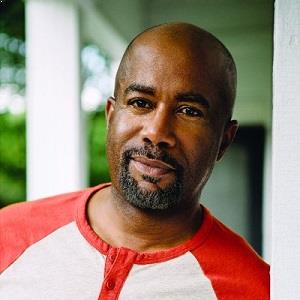 It seems that with other kind of music, they are looking for the next big thing, but with country music, they might be looking for that, but they also want to have that warm blanket that helped them through that relationship or that singer they have always loved.

I'm a kid who grew up in an all African-American neighborhood and got into schools and aspired to just be me, and didn't worry about labels or anything. Just wanted to be a success at what I did.

We went to church every Sunday. When I was a kid, the only time I sang was around my family.

We got to do a few things with President Clinton. To be invited to Washington again to play with Ashanti and all those other cool people there in front of President Bush and the rest of the world feels awesome. I'm really looking forward to going.

What is the relationship of Darius Rucker?

Darius Rucker is a married man. He is married to Beth Leonard. They married on 9 December 2000. Additionally, they have three children from this relationship Jack, Daniela Rose, and Daniella Rose.

He had a relationship with Elizabeth Ann Phillips. The pair has a daughter named Carolyn Pearl (b. April 21, 1995) from this relationship.

Who is Darius Rucker?

Darius Rucker is an American singer, and songwriter. He was the lead vocalist and rhythm guitarist of the Grammy Award-winning American rock band ‘Hootie & the Blowfish’.

He was raised by his single mother, Carolyn who was a nurse at the Medical University of South Carolina.

Additionally, he has three sisters and two brothers. He became interested in the world of music in his childhood years.

He is of American nationality. Furthermore, he belongs to an African-American ethnic background.

Talking about his education, Rucker graduated from Middleton High School. Additionally, he also entered the University of South Carolina.

The band played the college circuit for several years. After his graduation, the band began performing in several bars.

Eventually, they released their debut album, ‘Kootchypop’ in 1991. The band has released several other albums to date including ‘Cracked Rear View’, ‘Fairweather Johnson’, and ‘Musical Chairs’.

Rucker has also been successful in his solo career. He released his debut album titled ‘The Return of Mongo Slade’ in 2001.

Similarly, he has released albums including ‘True Believers’, ‘Home for the Holidays, ‘Southern Style’, and ‘When Was the Last Time’.

Rucker has an estimated net worth of around $12 million as of 2022. However, he has not revealed his current salary.

Darius Rucker became part of a controversy after he uttered some words about law enforcement during a July 24 concert in New York which put law enforcement in a negative light. At present, there are no rumors concerning his life and career.

Talking about his body measurement, Darius Rucker has a height of 5ft. 10 inches. Additionally, he weighs around 75 kg. Furthermore, his hair color and eye color are dark browns.

Darius Rucker is active on social media. He has a huge number of followers on social networking sites such as Facebook, Twitter as well as Instagram.