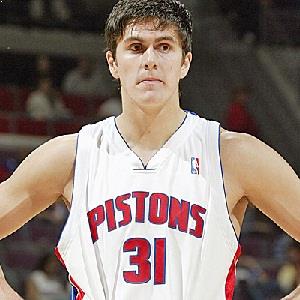 What is the relationship of Darko Milicic?

Reflecting on a personal life of Darko Milicic, he is married to Zorana Markus. The couple got into a married relationship on 23 May 2009 after being in a romantic relationship for several years. They have been blessed with two children in their married life. His son’s name is Lazarus Miličić and his other child’s name is unknown. He doesn’t have any extra-marital affairs and he is living a happily married lifestyle having no rumor of their separation.

Who is Darko Milicic?

Darko Milicic was born in Novi Sad, SR Serbia on 20 June 1985. He is of Serbian ethnicity and has a Serbian nationality.

He is the son of Milorad(father) and Zora(mother). His father was a police officer.  He has a sister Tijana who plays volleyball.

Milicic studied at Hemiska High School and he is called with different nicknames like Human Victor Cigar and Human White Flag.

Talking about the career journey of Darko Milicic, he started playing basketball professionally after joining Hemofarm at the age of 16. He played for the team till 2003 and then he joined the NBA. He was selected by Detroit Pistons in the 2003 NBA draft where he has won the 2004 NBA Finals after defeating Los Angeles Lakers.

On 15 February 2006, he was traded to Orlando Magic but soon became a free agent after his rookie contract tenure. On 12 July 2007, he signed a three-year contract worth $21 million with Memphis Grizzlies. While playing for the Grizzlies, he broke a knuckle on his right hand in a match against Indiana Pacers. On 25 June 2009, he was traded to New York Knicks and he was again traded to Minnesota Timberwolves in exchange for Brian Cardinal and cash consideration.  On 1 July 2010, he signed a four-year contract worth $20 million with the Timberwolves.

On 12 July 2012, Milicic was released from Timberwolves and he joined Boston Celtics in September 2012. After onwards, he retired from NBA in June 2013 in order to pursue a kickboxing career.

Darko Milicic: Salary and Net Worth

Unlike other players, he hasn’t been much rumor but he suffered a controversy for retiring from NBA to join Kickboxing.


Darko has a height of 7 feet. His body weighs 125kg. He has dark brown hair and brown eyes.