Darren Criss is an Emmy-winning actor, songwriter, and musician. Darren is married to the love of his life Mia in 2019. The couple was dating since 2010. 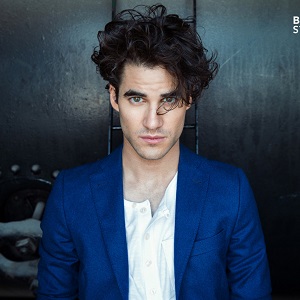 For me, I think everybody with half a heart tries to do their best to do their part of good during the holiday season

I always shoot for the moon in my work, so that I'm happy when I land on the roof

I've always enjoyed fashion and dressing up for things, whether it's high fashion or play fashion.

Darren Criss is married to his long-term girlfriend TV producer and musician Mia Swier. Mia is a director, producer, and musician.

Their wedding was held in the Sculpture Garden at the New Orleans Museum of Art. Further, their reception was in the Ace Hotel. The bride wore the dress designed by Vera Wang.

The wedding took place in New Orleans and was attended by stars such as Lea Michele, Chord Overstreet, Harry Shum Jr., and John Stamos.

Who is Darren Criss?

California-born Darren Criss is an actor and a singer. He is also popular as a lyricist/songwriter. Additionally, he is famous for starring as Harry Potter in “A Very Potter Musical”. He earned a nomination for Emmy award for writing the song, “This Time”.

Presently, he is a prominent figure in the media as the star of an American musical comedy-drama television series, “Glee”. He portrayed the role of Blaine Anderson in the series.

Darren was born on February 5, 1987, in the city of San Francisco in the state of California.

His birth name is Darren Everett Criss. He was born to parents, Charles William Criss(father) and Cerina Bru(mother). Born, he is 30 years old as of now. He grew up in his hometown, San Francisco, California. He was always interested in music from a young age.

What is the Ethnicity of Darren Criss?

His ethnicity is mixed(English, German, Northern Irish, and Scottish) and nationality is American.

As per his education, he attended Roman Catholic schools. Afterward, he joined Saint Ignatius College Preparatory. He graduated in 2005. Later, he attended the University of Michigan.

He graduated in 2009 with a Bachelor of Fine Arts. Additionally, he majored in majoring in Theater Performance and minoring in Musicology and Italian.

Darren Criss started his career since his childhood. As per his theater career, he joined the cast of “Fanny” in 1997. Afterward, he starred in other Broadway shows like, “Do I Hear a Waltz?” in 1998, “Babes in Arms” in 1999, and others.

As per his film career, he made his debut in 2005 in a short film, “I Adora You”. But it was a minor role. Afterward, in 2009, he made his debut on TV in a TV series, “Eastwick”. He played a recurring role as Josh Burton in 5 episodes. He went on to play several minor roles in TV and films.

Additionally, he appeared in films like, “The Chicago 8”, “Ghost Most Likely”, “Glee: The 3D Concert Movie”, and so on. Similarly, he also starred in TV series like, “Web Therapy”, “American Horror Story: Hotel”, and others.

His major mainstream success came after he joined the cast of TV series, “Glee” in 2009. She portrayed the role of Will Schuester in the series from 2010 to 2015.

As a singer, he has released multiple songs and albums. In 2008, he released a single “Skin and Bone”. Afterward, in 2011, he released his second single, “Dress and Tie”.

This popular actor plus singer has won and nominated for many awards.

Presently, he earns a pretty good amount of salary and has an estimated net worth of $3.5 million.

Back in 2015, he was part of the controversy. He made a “Transphobic” joke referencing Caitlyn Jenner. Later, he apologized to Caitlyn for his comment. Presently, he is free of any rumors that surround his personal and professional life.

Darren Criss has a height of 5 feet 8 inches. He has black hair and hazel eyes. His body weighs 69kg. Furthermore, there are no details regarding his body measurements.

Darren Criss took over social media with Nude Pic! Explains-‘Everyone Gets to Do One’!! Check out his Lifestyle, Career and Relationship!