He is also the author of the "Sports Biz" blog on CNBC.com.

The 43-year-old American sports business analyst, Darren Rovell is a married man. He tied the knot with his girlfriend Cortney Brooke Schlosser on 8 November 2008 after dating her for some time.

Together, they also have three children, two boys, and a daughter.

Furthermore, he also shared his photos along with his wife and children on his social media accounts. Since their marriage, they have maintained a sound relationship between them. Moreover, he has never been involved in any affairs.

Talking about his past relationship, he has never been linked up with any woman. Currently, Darren and Cortney are enjoying their married life and living elegantly. 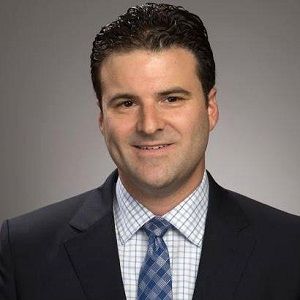 Who is Darren Rovell?

He reports and analyzes various sports shows on CNBC including Squawk Box, Power Lunch, and Street Signs. Furthermore, he is also the author of the “Sports Biz” blog on CNBC.com.

As of now, he has interviewed some big names in sports including Michael Jordan, Tiger Woods, Maria Sharapova, Dwyane Wade, LeBron James, and a few others.

In addition, he has won an Emmy Award for his effort in NBC’s 2008 Election coverage.

Darren was born in 1978, in the United States of America. Talking about his nationality, he is American and his ethnicity is unknown. He is the son of Marcia Gordon Rovell and Jeffrey Rovell.

Moving towards his education, he joined Roslyn High School in Roslyn Heights, New York, and completed his graduation in 1996.

Darren began his career when he was recruited as a sports business writer for ESPN.com. During that time, he reported on sports agents, endorsements, and contracts on ESPN’s SportsCenter.

Moreover, he is also a writer who has written a book named First In Thirst: How Gatorade Turned The Science of Sweat Into A Cultural Phenomenon.

Additionally, he also co-wrote the book On the Ball: What You Can Learn About Business From America’s Sports Leaders.

As of now, he has interviewed some big names in sports including Michael Jordan, Tiger Woods, Maria Sharapova, Dwyane Wade, LeBron James, and a few others.

Being a famous sports analyst, he pockets a handsome amount of money from his profession. However, his salary and net worth are unknown.

As of now, he has won an Emmy Award for his effort in NBC’s 2008 Election coverage.

Back in November 2009, he came into controversy after his controversial statement towards Meb Keflezighi where Darren told him that he was a ringer.

Later, he apologized. Furthermore, he again dragged into a controversy as he made various incorrect statements about the NFL Players Association’s Financial Advisor Program.

Moving towards his body measurements, he has a pair of brown eyes and brown hair.

Also get to know more about the birth facts, education, career, net worth, rumors, height, and social media of different personalities like Jay Harrington, Mike Holmes, and Mehmet Oz.