Darren Waller is currently single. He has stayed very private about his personal life and has not revealed any past affairs or relationships. Waller seems to be focused on his career as of now. 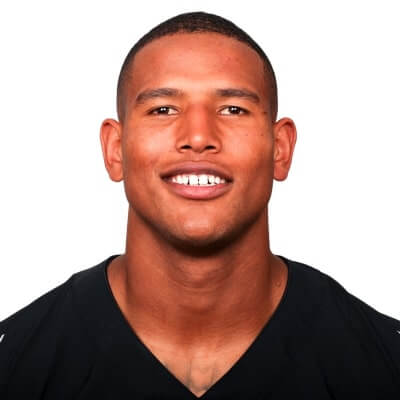 Who is Darren Waller?

Darren Waller is an American football player who plays as a tight end for the Las Vegas Raiders of the NFL. After a stellar breakout campaign in 2019, the NFL Network voted him the No. 99 overall players in the league.

Darren Waller was born as Darren Charles Waller in Landover, Maryland, on September 13, 1992. As of 2021, his age is 28. He was born to parents Dorian Waller (father) and Charlena Waller (mother). He is one of his parents’ two children and has a sister named Deanna.

Waller’s great-grandfather was the legendary jazz musician, Fats Waller. He spent his childhood days in Colorado Springs, Colorado, and Marietta, Georgia. His ethnicity is African-American.

Regarding his educational background, he went to North Cobb High School in Kennesaw, Georgia. Following his graduation from there, he joined Georgia Tech College where he played as a wide receiver.

After playing college football for three seasons at Georgia Tech, the Baltimore Ravens selected Darren Waller in the sixth round of the 2015 NFL Draft. Unfortunately, he picked up an injury ending his season.

The following two seasons were even tougher as he suffered from drug addiction and his seasons were hampered by suspensions. After serving a year-long suspension, on August 7, 2018, he was reinstated by the league and waived on September 1, 2018.

He got another shot at his NFL career when the Oakland Raiders signed him on November 26, 2018, of the Ravens’ practice squad. That season, he finished with six receptions for 75 yards.

The 2019 season would see him rise to the peak of his career as he bounced back incredibly much to the shock of many NFL fans all around the world. In the debut game of the season against the Denver Broncos, he caught seven passes for 70 yards. In Week 7 against the Green Bay Packers, he caught 7 passes for 126 yards and 2 touchdowns. Although the team was constantly performing poorly, Waller managed to perform consistently well week in week out.

In losses against the Jacksonville Jaguar and the Denver Broncos, he had eight catches for 122 receiving yards and six passes for 107 yards respectively. The Chiefs advanced to the Super Bowl and Waller was named as an alternate to the 2020 Pro Bowl.

He finished the 2019 season with 90 receptions, 1,145 receiving yards, 3 touchdowns, and started all 16 games.  After a stellar breakout campaign in 2019, the NFL Network voted him the No. 99 overall players in the league.

Darren Waller has an estimated net worth of around $3 million as of 2021. His net worth is expected to keep increasing at a fast pace now that he has signed a long-term contract with the Raiders.

Waller signed a three-year contract extension on October 16, 2019, worth $29 million. He has a guaranteed annual salary of around $3.2 million.

Waller had a rough few years battling his addictions nearly ending his career. In 2016, he was suspended for four games after testing positive for marijuana, which he had been suspended for using twice in his time at Georgia Tech College.

On June 30, 2017, Darren got suspended for the entire 2017 season for once again violating the league’s substance abuse policy. After this, many thought his career in the NFL was over.

“I was in Baltimore, I was just like a vegetable. I was getting high literally every day. Whatever I could get my hands on. It was like opiates, oxy, pills, Xanax, cocaine. Not caring about anything, like any kind of consequences or anything like that.”

Thankfully, he has overcome his addictions and is considered to be one of the best tight ends in the NFL right now.

Waller stands at a height of 6 feet 6 inches and weighs around 116 kg. He has black hair and a pair of dark brown eyes.

Darren Waller is active on social media. He is active on Instagram where he has over 200k followers and more than 22.7k followers on Twitter. However, he seems to be inactive on Facebook.

You may also like to read more about the Bio, Career, Net Worth, Relationships, Social Media, and more about Troy Polamalu, Chris Cooley, Tyler Johnson (NFL), and more.