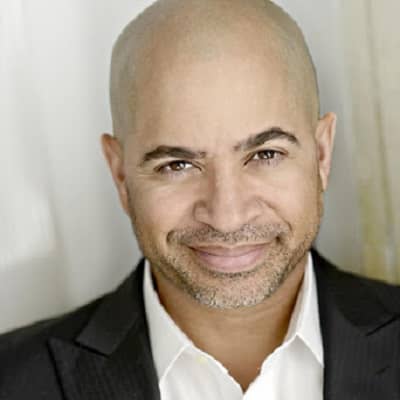 Darryl M. Bell is in a long-term relationship with actress, Tempestt Bledsoe. The couple is dating for the past 20 years.

The duo has been dating since 1993. However, they have not married yet.

Bledsoe has helped her man with emotional support. She assisted him to stabilize finance after he lost all his heritage amounting to a total of $14 million because of a bad investment.

Moreover, they were rumored to be wedded which was later confirmed by Bell that the couple was not marrying at that moment. It is known that Tempestt controls the finance of their household and is the head of the family as well.

Who is Darryl M. Bell?

Darryl M. Bell is a well-recognized American actor. Bell is widely known for his character as Big Brother X-Ray Vision in the 1988 Spike Lee film School Daze and as Ron Johnson Jr. on the NBC sitcom A Different World(1987-93).

Also, he has featured on the short-lived UPN sitcom Homeboys in Outer Space as Morris Clay.

Darryl is the son of her father, Travers J. Bell whereas his mother’s details are still not shared. He belongs to Alpha Phi Alpha Fraternity. He comes from a wealthy family. Bell’s father was the founder of the prime black firm on the New York Stock Exchange.

Talking about his nationality, Bell holds an American identity whereas his ethnicity is African American.

Regarding education, Darryl studied at Delbarton School in Morristown, New Jersey, in May 1981. Further, he took his graduation degree from Syracuse University.

Officially, the actor, Darryl began his career in the year 1987. He featured in the television series A Different World portraying the character of Ron Johnson. The series was highly loved by the public as it featured more than 100 episodes on the NBC network.

Furthermore, the actor emerged in a role in the series ‘Cosby’ (1997) that is based on the book ‘One Foot in the Grave.’ David Renwick is the author of the book. Similarly, in the year 2004, he emerged in the TV movie Beverly Hills S.U.V opposite his girlfriend.

Also, Darryl performed in the reality television series Househusbands of Hollywood in the year 2009 alongside his girlfriend.

It is reported that Darryl M. Bell has an estimated net worth of $6 million.

However, he has not disclosed his exact salary, earnings, and assets details till now.

Bell’s father owned a Stock Exchange company in New York in 2971. He founded Daniels & Bell Inc. a securities firm on Wall Street whose net worth was around $ 15 million. However, his dad died in 1988 due to a heart attack.

After the demise of his father, Darryl was the head of the multi-million dollar business. Nonetheless, Bell lost almost all of his father’s million due to lack of experience. As a result, his dad’s widow and two aunts charged him for mismanaging the funds.

A Superior Court eventually decided that Darryl M. Bell’s inexperience destroyed the business. The business was indebted to several which includes IRS which had a $2.3 million stake.

He stands at a height of 5 feet 7 inches. Also, he has a balanced bodyweight of 81 kg.

Furthermore, Bell has dark brown eyes whereas he is bald.

About his social media presence, Darryl M. Bell is an active personality on social media. Daryll has more than 23.8 k followers on his official Instagram account @darrylmbell.

He is also active on Twitter with around 14.9 k followers.