Daryl Hall has been married twice in his life but both of his married life ended in a divorce. First, he married Bryna Lublin in 1969 and he converted to Judaism to get married to her. Their married life lasted for three years and they got divorced in 1972.

Daryl was in serious affairs with an American songwriter Sara Allen for about three decades till 2001 and then they broke up.

In 2009, Daryl married with Amanda Aspinall, their married life lasted for about six years and then they got divorced on 13th of August 2015. 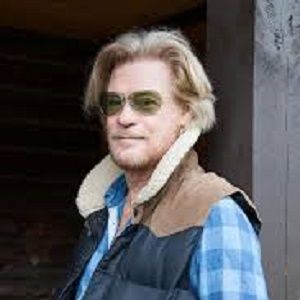 [on beating Lyme Disease] I'm optimistic that I want to beat it, and I don't have nearly as bad as a lot of people get it.

[on childhood friend Todd Rundgren] Todd and I grew up almost in the same neighborhood and as kids, we listened to and were influenced by pretty much the same musicians that were part of the creation of the sound of Philadelphia.

[on the death of Michael Jackson] When videos first started, we didn't know what to do, we just jumped around in front of a camera. Michael was the first one to take it seriously and said, "Okay, I'm gonna make these extravaganzas". He raised the bar for everybody in the '80s. On "We Are the World", we were all in the room together. He sort of clung to Diana Ross pretty much but, at one point, I was off to the side and he came over to me and said, "I hope you don't mind, but I stole 'Billie Jean' from you", and I said, "It's all right, man, I just ripped the base line off, so can you!" Michael Jackson created a style that was unique to him, he was incredible. And he didn't lip synch. While he was doing all those dances, he was singing, everybody else should take note. [on the death of Mike Berniker] I remember Mike's mischievous sense of humor. He had the vision to sign Hall &

Oates in the very early days, when we were relatively unproven. In regards to the music business, Mike was one of the good guys.

Who is Daryl Hall?

Daryl Hall is a keyboardist, guitarist, songwriter, producer,  American rock, R&B, and soul singer. He is popular for his stage name Daryl Hall and as the co-founder and lead vocalist of Hall & Oates.

A producer was born on October 11, 1946, in Pottstown, Pennsylvania, the USA as Daryl Franklin Hohl.

His parents each have a background in music, his mother was a vocal coach and his father was a professional singer.

He was interested in singing from his childhood. So he started recording while still a student at Owen J. Roberts High School.

Then after, he majored in music, in college at Temple University in Philadelphia, while continuing to record, working with Kenny Gamble and Leon Huff as both an artist and a session musician.

He started his career by forming the vocal harmony group the Temptones, he and four other white Temple University students, during his first semester at Temple, in the fall of 1965. Defeating both The Ambassadors and The Delfonics in a contest at the Uptown Theater, they were popular additions to the largely black Philly soul scene.

Hall met John Oates, who was also an undergraduate at Temple University in 1967. Both duos have sold more albums than any other duo in music history. Their second album, Abandoned Luncheonette,  released in 1973, yielded the single, “She’s Gone”, which went to No. 7 in the U.S.

As well as the era has also produced the popular songs “Sara Smile”, “One on One”, “Family Man,” “You Make My Dreams,” “Say It Isn’t So” and “Method of Modern Love”. Hall co-wrote and produced, with Arthur Baker, the single “Swept Away” for Diana Ross in 1984,  which reached US No. 19. His solo works as Soul Alone and Can’t Stop Dreaming, both of which were received well internationally.

In 2010, he was the nominee for the best Pop Performance By A Duo Or Group With Vocals shared with John Oates for the song “Sara Smile.”

Besides that, in 2016, he was the winner for the recording shared with John Oates in Star on the Walk of Fame.

Till the date, he has not been the part of any controversy and rumor. He is maintaining his personal life properly.

He earns a huge amount of money but has not disclosed to the media or public.

His estimated net worth is about $70 Million as of 2022, which he earns from his work.

He has an average body type with blonde hair and with blue eyes.